Inspired by Charles Calleros' post from a few years ago, I teach Barfield v. Commerce Bank, N.A., 484 F.3d 1276 (2007). Inspired by Charles's other post from that guest stint, I also teach Gregory v. Dillard's.  Both of these cases are about Black people denied the ability to enter into contractual relations or commercial transactions.  In one of the cases, a federal statute, 42 U.S.C § 1981, comes to the rescue.  In the other, it doesn't.  It's a nice pairing.

I introduce these cases early in the course, right after we cover freedom of contact, for three reasons.  First, I want them to know that the common law of contracts is not the final word on legal obligations relating to contracts.  Second, the difference in approach in the two cases illustrates the difference between judges who follow precedent and think that their power is limited to the application of a remedial statute as written and judges who think more broadly about remedial purposes and may be willing to go beyond the statutory text.*  Third, and most importantly for the purposes of this post, I want them to help them to see right at the beginning of their legal careers that if you formulate seemingly neutral laws of general applicability but apply those laws in a racist society, the law can become a tool of structural racism.

I have had occasion on this blog before to highlight Will Baude's excellent podcast with  Dan Epps, Divided Argument (most recently here).  Today, I want to highlight Will's (that's Will, at right) other podcast, Dissenting Opinions, the second season of which is entirely devoted to a conversation with Khiara Bridges (left) about critical race theory.  I recommend the entire series to anyone who wants to really understand the difference between critical race theory and the phantasm that goes by the same name and has become the subject of incoherent legislation across the country.  Professor Bridges and Will discuss structural racism in Episode 2.

I recently came across a terrific illustration of structural racism on another beloved podcast, This American Life, Episode 773, The Longest Distance Between Two Points.  Act I of that episode is about a part of the Mississippi constitution that disenfranchises certain categories of felons.  The provision has a racist background, dating from 1890, when Whites in Mississippi were concerned that the state might become majority Black and that the Whites would lose control of the legislature.  They wrote a number of measures into the 1890 constitution designed to disenfranchise Blacks, including the felony law.  To this day, according to This American Life, 60% of those disenfranchised under this constitutional provision are Black, even thought Blacks account for only 39% of the population. 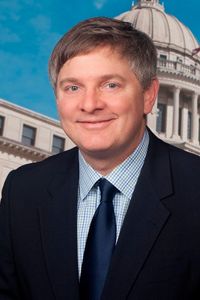 The episode follows the odyssey of one man, Gerald Laird, convicted of robbery in 2002, as he tries to get a private bill through the Mississippi legislature so that he can vote again.  The process is complex and opaque.  You need to be really determined to make it through and even then, the legislature passes only a handful of private bills each year.  Gerald's private bill passed the House committee and the full House without any opposition.  It was never presented in the Senate committee, because the chair of that committee, Joey Fillingane (right), exercised his discretion and never put Gerald's bill on the agenda.  It died.

The historians that I've talked to about this to try to learn more about it said that it was this 1890 constitutional convention that met, and that the goal of that convention was to keep Black people from voting, and that these criminal disenfranchisement, these laws, were a part of that plan.

I don't know if that's the case or not. I wasn't there. I've not studied the history of the 1890 constitution. And certainly, Mississippi has a very checkered past when it comes to race relations. We treated African-Americans very poorly in some parts of our history. And I'm certainly not going to sit here and defend that or even try to. I wouldn't want to. But if you're asking me, is the suffrage right being treated differently based on your race in 2022 as it relates to suffrage bills that we consider in the legislature, absolutely not.

I don't even know the race of the person. I'm sure I could probably try to find out by asking Department of Corrections to print me a social history, the person's age, and racial background, and all of that if I wanted to. I've never done that. I don't intend to start. But I mean, it's not obvious to me, just by looking at a bill, what racial background someone is a part of.

Mr. Kauffman raises a point about structural racism.  Mr. Fillingane responds by defending himself against what he perceives as an accusation that he is racist.  They are essentially talking past each other.  Mr. Kauffman is not saying that Mr. Fillingane had a racist motive in killing Gerald's private bill.  Because of structural racism, no such motive is necessary.  When you apply a racist 1890 provision of the Mississippi constitution in a neutralm objective manner, you are doing the work of structural racism regardless of your personal views on race.

And now the ball should be in Mr Fillingane's court.  He professes ignorance in the episode, but he is ignorant no longer.  Or his ignorance is a choice.

For newcomers to the blog interested in this topic, we have had a number of contributions on critical theory, critical race theory, and feminism.

*Charles and I may differ on Commerce Bank.  I think that case is about a simultaneous exchange and thus not about a contract.  Nonetheless, I think the court's conclusion that Congress intended 42 U.S.C. § 1981 to cover such transactions is plausible.  With my students, I make much of the interpretive stretch involved in order to make the contrast between Commerce Bank and Gregory as clear as possible.

Jeremy, thanks for the link to the Epps Bridges podcast, which i am listening to. I think i can clear up one mystery they address in the second episode: How has CRT become the target of so many misguided attacks from the Right Wing., which misdescribe CRT completely. I think that the answer is that the attacks should have been directed not at CRT but at "Anti-racism Training," which has been made mandatory for many students and employees over the last several years. All of the features that they mis-ascribe to CRT are actual or misunderstood elements of the scripts used in A-RT. And the reactions to ART by some White students would very definitely fuel anger by White parents. Somehow, ART was mislabeled as CRT on Fox News and we were off to the races.

I'm afraid I'm more inclined to see a vast right-wing conspiracy behind this. The Manhattan Institute's Christopher Rufo has taken a leading role in fomenting the nonsense that children are being exposed to "critical race theory" in public schools. Think tanks have connections to state legislatures, and it grows from there .

Looking up where insurrectionist Jeffrey Clark is hanging out until he gets disbarred, I came across this: https://americarenewing.com/issue_topic/critical-race-theory/