As reported here on nondoc.com, Oklahoma's Department of Tourism and Recreation has cancelled its contract with Swadley’s Foggy Bottom Kitchen, which provides food service in Oklahoma state parks “due to suspected fraudulent activity and questionable business practices.”  More specifically, in its termination letter, the Department noted that Swadley's seemed to be engaged in "highly questionable billing, invoicing, and record keeping practices." 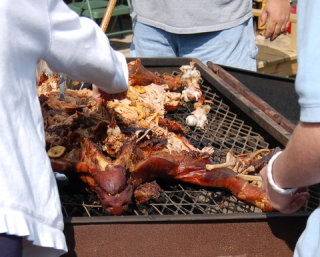 Swadley's insists that it has done nothing wrong and that it has cooperated with state employees all along . Swadley's cause was not furthered when a 2018 video surfaced in which Swadley's founder Brent Swadley states, “I bootlegged barbecue. I wouldn’t be where I’m at today if I followed by the rules and satisfied all the permits and all the legalities and stuff out there. Sometimes you’ve just got to go out there and do it and don’t worry about it.”

Swadley's won the contract to provide food services in Oklahoma's state parks after a bid procedure in which it was the only bidder, and the reporting suggests that the terms of the contract changed significantly in Swadley's favor after it was awarded the contract.  Swadley's was allegedly paid $17 million in management fees and renovation costs, and there are suggestions that the  Department had not engaged in adequate oversight.  Swadley's was paid $1.3 million in management fees alone, a marked increase from the $0 paid to previous operators.

In the meanwhile, the state is scrambling to provide food service and catering in its state parks.  You do not want to be around a hungry Oklahoman who can't find a barbecue joint.