Is It Time for a General Strike? 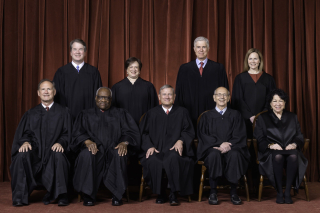 Last week, the Supreme Court heard argument in two cases relating to the federal government's attempts to address the COVID-19 pandemic through vaccine mandates/testing and masking requirements in the workplace.

In NFIB v. Department of Labor, Petitioners bring a challenge to an Occupational Safety and Health Association's "Emergency Temporary Standard" (ETS).  The ETS applies to workplaces with over 100 employees and requires that affected workers either get vaccinated or wear face masks and submit to weekly COVID testing.   The ETS provides for both medical and religious exemptions from any vaccine requirement.  While the Fifth Circuit granted petitioners an administrative stay of the ETS, all challenges to the ETS were consolidated and heard by the Sixth Circuit.  One footnote from the Sixth Circuit opinion gives you a sense of the range of sensibilities animating these two sister Circuits:

In comparing this case with Alabama Association, the Fifth Circuit wrote, “But health agencies do not make housing policy, and occupational safety administrators do not make health policy.” BST Holdings, 17 F.4th at 619. The Fifth Circuit fails to acknowledge that OSHA stands for the Occupational Safety and Health Administration. See 29 U.S.C. § 651(b) (“The Congress declares it to be its purpose and policy . . . to assure so far as possible every working man and woman in the Nation safe and healthful working conditions . . . .”) (emphasis added).

In a 2-1 panel opinion, the Sixth Circuit refused to enjoin the ETS.

In the second case, Biden v. Missouri, the issue is whether the Supreme Court should uphold an  injunction issued by a Missouri District Court blocking a federal rule that requires all health care workers at facilities that participate in Medicare and Medicaid programs to be fully vaccinated against COVID-19 unless they are eligible for a medical or religious exemption.

The cases come to the Court in a highly unusual posture.  In the last few terms, the Court has been deciding cases in an expedited manner, without full briefing or oral argument, on what has come to be known as the "shadow docket."  Perhaps in light of concerns raised in the legal community about the shadow docket, the Court has adjusted, placing the case on its regular docket, but with an expedited briefing schedule.  Based on oral argument, it seems that the Court is poised to strike down the ETS, at the very least.

It bears noting that the Supreme Court itself subjects all people who enter its halls (and it allows very few people in) to a mandatory COVID testing regime.  Both the Ohio and the Louisiana Attorney Generals, who are challenging the OSHA regulation, had to attend oral argument remotely, having tested positive for COVID.  Justice Sotomayor, who has diabetes, attended remotely, perhaps because she knew that Justice Gorsuch would not wear a mask, despite court rules requiring that everyone in attendance other than the Justices wear N95 masks.

Such rules are wise.  The median age on the Court right now is 66.  We want the Justices to stay healthy, and it is perfectly reasonable that the Court should adopt rules to protect the Justices' health and safety.  It will be most peculiar if the Justices deny the federal government the power to adopt rules that safeguard those of us who cannot control the safety of our own work environments.

The issue may be largely symbolic.  Most people are vaccinated.  They can still  contract and spread the omicron variant, although its effects are likely to be less severe in the vaccinated.  But the threat of serious illness or death, and the attendant anxiety accompanying that threat, is not symbolic for millions of workers whom the Court refuses to allow the government to protect.  If the Court rules as court-watchers predict it will, it will be making a larger legal and political point.  It may not uproot the administrative state root and branch, but it can engage in some selective pruning. 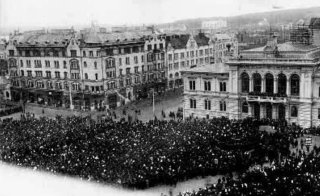 Perhaps, if the Court strikes down the ETS, workers across the nation should adopt Justice Sotomayor's posture and simply opt out.  There has been a lot talk on the left about legislative action to temper the power of the Supreme Court.  That's a dangerous game if  plainly animated by partisan purposes.  I have voiced my criticisms of Mark Tushnet’s version of “constitutional hardball.” But a genuine popular uprising in response to an overreaching Supreme Court decision can send a message strong enough to prompt bipartisan legislative action.  For once, the left would have the intransigent Republicans over a barrel.  The Court seems to want to own the libs so that it can strike a blow in a culture war.  But even relatively unorganized labor can hit the Court and its ideological fellow-travelers where it hurts -- in the economy.  A week or two without workers should be enough to get even the Republican base to call upon their legislators to vote yes on a piece of legislation or face consequences as the ballot box.  A Court decision striking down a reasonable and necessary health and safety regulation can provide a rare opportunity for the people themselves to bypass failed mechanisms of checks and balances and hold the Court accountable for decisions that are inconsistent with our constitutional design and recklessly endanger American lives.

But who knows?  Perhaps none of this will be necessary.  The ETS was a response to the delta variant.  Omicron poses different challenges, and the ETS may no longer be the right response.  Or, the next variant may have be as deadly as delta and as communicable as omicron.  The ETS is an emergency, temporary standard.  The government needs to have the ability to act expeditiously and flexibly to national health challenges.  If the Court does not get out of the way, we can call the loss of the Court's legitimacy another COVID casualty, but it's really a self-inflicted wound.

Great post, Jeremy. It may be that a general strike would exert pressure on those few remaining Republican politicians who care about the national economy or public health. But the last six years persuades me that the committed Trump voters, who now completely dictate Republican national and politics, would not pressure the party to enact liberal reforms or to support OSHA’s regulations just because the country held a general strike. Indeed, some of the more extreme among them might welcome such behavior as one step closer to the civil war that so many of them say they want.