Does USNews Understand How Offers Work? The Case of Elon Musk and World Hunger

According to the USNews website, Elon Musk offered $6 billion to the United Nations Food Programme if it can show how it will solve world hunger.  According to USNews, "Elon Musk says he will sell $6 billion worth of Tesla stock and donate it to the United Nations’ food agency if it could show how the money would solve world hunger."  I don't read Elon Musk's Tweet (yes, of course, he did it by Tweet) as an offer.

David Beasley, the head of the UN's World Food Program, argued that governments are "tapped out," and that it's time for billionaires to step up to address the needs of 42 million people around the world who are on the verge of starvation.  As he told CNN, $6.6 billion would enable his agency to avert the food crisis for 42 million people.  He says it's not complicated. 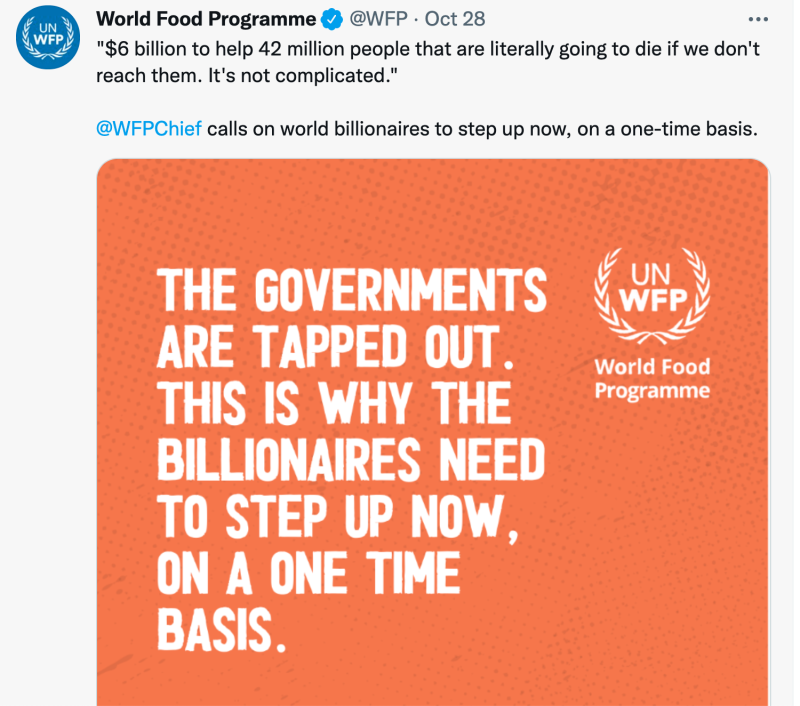 I'm not sure about the "not complicated" part.  I think the logistics of getting food to 42 million people would be challenging.

In any case, Mr. Musk responded as follows: 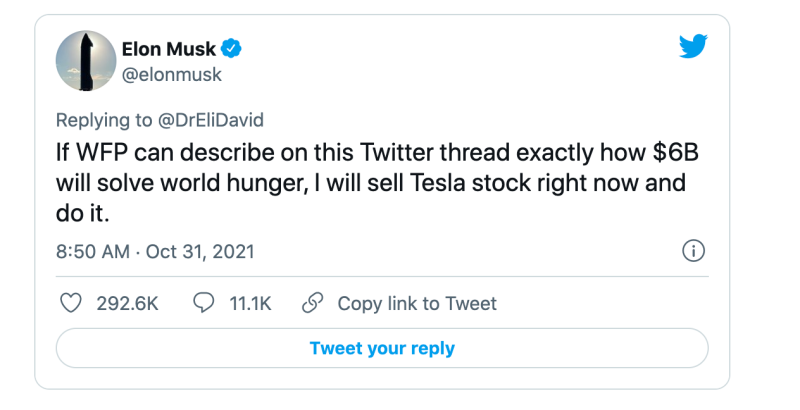 I would not characterize this Tweet as an offer.  It's not even responsive to Mr. Beasley's challenge.  He did not state that he could solve world hunger with $6 billion.  He said he could feed 42 million people on the brink of starvation with $6.6 billion.  It's not clear why Mr. Musk is rounding down by $600 million.  I guess when you are as rich as he is, a few hundred million one way or another are nothing to fuss about.

Perhaps feeling insecure about his original Tweet, Mr. Musk then added another condition: 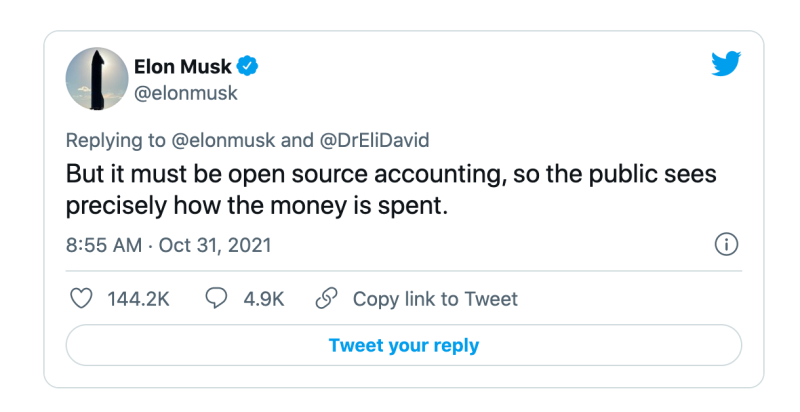 At best Mr. Musk's Tweet is a conditional offer, but the condition is so absurd as to render the promise illusory, most likely.  How is Mr. Beasley to describe in a Twitter thread how he would solve world hunger with $6 billion, given that he never claimed that he could do so?  Mr Musk seems to be trying to play Zehmer.  Beware, lest your teases and jokes be construed as offers.  But Mr. Beasley will not play Lucy.  He wants to negotiate:

The only thing I see on offer here is  an example of a billionaire's callous indifference to an urgent problem that his wealth could profitably address.  Mr. Musk likes sunlight.  Perhaps Mr. Beasley's attempt to publicly shame Mr. Musk into taking a break from playing with his rockets and address urgent human needs on earth will cause him to see his position as the world's wealthiest man in a new light.

Thanks to my OCU 1Ls to calling my attention to the Tweets!

Musk is a tool, for sure—what else is new?—but the initial outreach from Beasley/WFP also struck me as not particularly serious and gimmicky. It really felt like more of the same revolting concept of the ultrarich as saviors/messiahs and concomitantly worshipping at the altar of the supposedly all-powerful and superior to gov’t “private sector.”

That’s actually just what I’d expect from a guy like Beasley. Here’s a nice little example of his approach from when he was SC governor: “Th[e] [SC] General Assembly has … a single-minded purpose to create wealth through the private sector by getting off the backs of business, cutting taxes and reducing regulations.” I’d say to anyone so fervent about “getting off the backs of business” through tax cuts, don’t do that ad nauseum and then moan about gov’ts being all “tapped out” at the end of it.

Of course, the whole “tapped out” thing isn’t even true either. $6b is pocket change for the affluent gov’ts out there. To put it in perspective, the Large Hadron Collider just by itself cost 50% more than that (about $9b). (Don’t ask me why I pulled up that example!) But again, the whole fiction of impoverished gov’ts is useful to promote the billionaire CEO as hero/savior mythology, which is something I’m sure Beasley can get behind.

Luckily, if my math checks out, Beasley has less than 6 months left on his term at WFP anyway, so I think we can safely ignore whatever he says for the duration. He won’t be missed. (And yes, I note that WFP won the Peace Nobel in 2020, but somehow I doubt it was because of anything Beasley did personally. After all, this is a mammoth organization with almost 20k employees.)

Thanks for this. I didn't know Beasley's background, so this puts things in perspective. Still, I don't have any problem with his attempts to shame the billionaires, and now is an opportune time for him to do so, as their private space race makes them look like they have the moral compass of toddlers fighting over toys.

It is true that states have means, but there's only so many times you can go back to the same well, and it is not inconceivable that pressuring the billionaires will lead to challenges or matches from states.