That Danish Museum and Joni Mitchell

On her concert album, Miles of Aisles, Joni Mitchell (right and below, petting Buddy in the Oval office) is tuning up, and people are shouting requests at her.  Joni (we've been on a first-name basis since the 70s) is also an accomplished painter and she muses:

That's one thing that's always, like, been a difference between, like, the performing arts, and being a painter, you know. A painter does a painting, and he paints it, and that's it, you know. He has the joy of creating it, it hangs on a wall, and somebody buys it, and maybe somebody buys it again, or maybe nobody buys it and it sits up in a loft somewhere until he dies. [Joni tends to go to dark places.]  But he never, you know, nobody ever, nobody ever said to Van Gogh, "Paint a Starry Night again, man!" You know? He painted it and that was it.

And then she proceeds to perform The Circle Game, which I hope she was planning to play regardless of fans' requests. 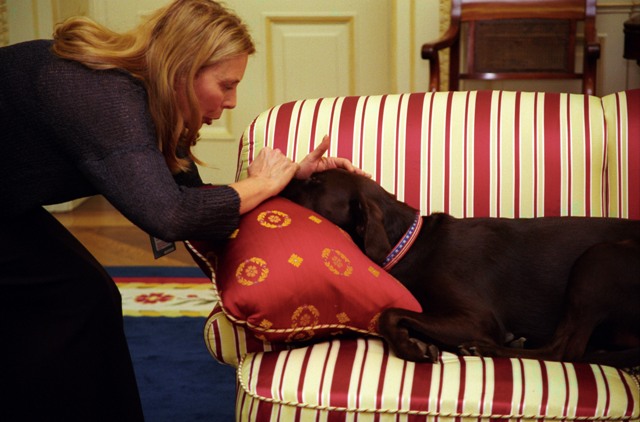 And yet, for some reason, the Danish Kunsten Museum at issue in Sid's post from earlier today essentially said to the artist, Jens Haaning, "Hey, paint A Starry Night again, man."  Except it wasn't an immortal painting that is etched in the consciousness of every sentient being who has ever had the pleasure of marveling at it, it was a piece of concept art that will be as ephemeral in our consciousness as the last one about which we commented on this blog.

According to the BBC, Haaning was asked to reproduce previous works of art in which he had framed currency representing the annual salary in Denmark and Austria (you can view his previous works here).  That seems like a risky request to make of a conceptual artist interested in the plight of the working man.  Joni Mitchell understood the difference between making fixed works of art and performance art.  She didn't necessarily appreciate people shouting requests at her as though she were some street corner musician playing For Free, but she recognized that it is socially acceptable to ask a musician to play a request but inappropriate to ask a painter or a sculptor to reproduce a work of art (unless the artist is Bob Ross, who re-created each painting thrice!).

Sid DeLong has already covered the legal issues in the Haaning case well.  I think the contract case and the restitution claim are easily separated.  The museum contracted for a conceptual work of art, and it got more than it bargained for.  Mr. Haaning's original work might have caused some sort of stir in the art world, but it was nowhere near as successful as Take the Money and Run, the art of breach of contract as performance.  The success of the work has garnered the museum and Mr. Haaning far more notoriety than they would have gotten from a reproduction of Mr. Haaning's work.

However, it appears that he never contracted for the right to keep the 530,000 Danish kroner he was supposed to use to make the art.  The title of his blank canvases could be construed as an admission of liability.  Not having seen the documents relating to the deal between artist and museum one cannot be certain, but it is hard to imagine a legal argument for why Mr. Haaning should get to keep the money.

Friend of the blog Mitu Gulati has also published a discussion of The Cheekiest Artist of Modern Times over at Credit Slips.

Commentary, In the News, Music | Permalink