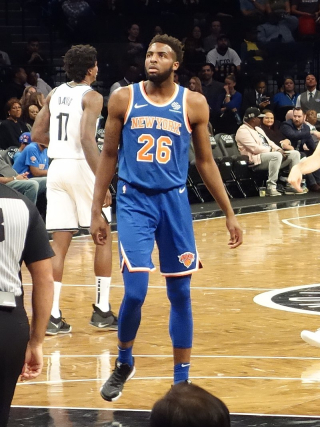 District Judge Jed Rakoff of the Southern District of New York recently decided a juicy third-party beneficiary claim.  The link is not publicly available yet, but look for it coming soon.  Plaintiff David Lee is a player agent certified by the National Basketball Players Association (NBPA), the NBA players’ union.  Lee had arranged to represent Mitchell Robinson (right), at the time a potential NBA draftee. Defendant Raymond Brothers is also a NBPA-certified agent.

All NBPA-certified agents must sign a "certification agreement," which states the agents agree to all NBPA’s regulations, including a rule against agents giving monetary incentives to induce a player to hire them.

Lee claimed that Brothers breached this NBPA regulation by enticing Robinson—with the inducement of a Chevrolet Silverado pickup truck—to end his contract with Lee and sign a new player agent contract with Brothers instead. Lee alleged that Brothers’ conduct put him in breach of his contract with the NBPA, and Lee sought damages as a third-party beneficiary. Robinson had signed a multi-year contract with the New York Knicks.  Lee claimed entitlement to the commission he would have received had the contract with Robinson not ended three months before the draft season.  I will resist the temptation to make jokes about the Knicks here.  I'm a Bulls fan.  Glass houses, etc.

Lee’s third-party beneficiary claim relied on language from Section 3.B.2 of the NBPA agreement, which he characterized as an anti-poaching provision intended to protect agents from unscrupulous behavior such as that alleged in the complaint.  Indeed, who is going to enforce the prohibition on monetary inducements if not jilted agents?

On October 6th, in Lee v. Raymond Brothers, Judge Rakoff rejected Lee's third-party beneficiary argument and dismissed counts I and II of his complaint which were based on that alleged status. Quoting its prior ruling in In re George Washington Bridge Bus Station Dev. Venture LLC, Judge Rakoff reiterated that under New York law, a person is a third-party beneficiary of a contract where (1) there is a valid and binding contract between the contracting parties, (2) that contract "was intended for the third party's benefit," and (3) the benefit to that third party "is sufficiently immediate to indicate the assumption by the contracting party of a duty to compensate the third party if the benefit is lost."

In this instance, as in Piccoli A/S v. Calvin Klein Jeanswear Co., a plaintiff cannot recover as a third-party beneficiary where the contract showed that the parties’ intent was to limit the power of enforcement to themselves. Section 3.B.2 states an intent to protect players from agent abuse and contains no statement of intent to benefit agents. The players were the NBPA’s intended beneficiaries, and the NBPA, not agents, was the intended enforcer of the regulations.

Lee’s additional claims, for tortious interference with Lee’s contract and business relationship with Robinson, were dismissed because one cannot tortiously interfere with a contract terminable at will.  The contract between Lee and Robinson allowed either party to terminate with 15 days’ notice. Although Robinson did not provide the requisite notice, even if he had, the draft season was still months away and Lee’s prospects of a commission still would have been long gone had he given notice.  As a result, Lee failed to allege any harm as a result of Brothers’ alleged wrongful offer to Robinson.

Finding that Lee was not an intended third-party beneficiary of NBPA contracts with other agents, the Court granted Brothers' motion and dismissed Lee's amended complaint with prejudice.