Contracts and the Netflix Series, "The Chair" 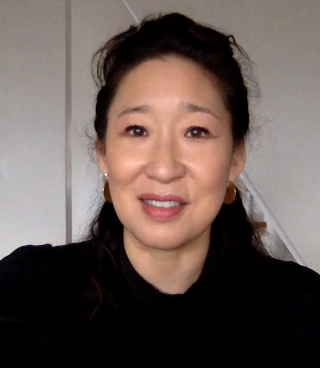 Like seemingly everyone else, I have become obsessed with Netflix's six-episode mini-series The Chair.  It's not great, but it's home, and it features Sandra Oh (right).  I would pretty much watch anything with Sandra Oh, which is why I continued to watch Killing Eve, even after I lost interest in the characters.  Once I lost interest in Villanelle's clothes, I knew it was over.  But I digress.

If you have been asleep for the past fortnight (or don't have Netflix), let me fill you in.  Sandra Oh stars as, Ji-Yoon, the first woman chair of an English Department at a distinguished university.  Her colleagues are all stock figures: the doddering tenured deadwood who barely knows what's going on; the more with it stick-in-the-mud, Eliot, who desperately wants to believe he is still in his prime; the under-appreciated senior female Associate Professor, Joan, still passionate about Chaucer and still suffering casual sexism with dignity; the charismatic, self-destructive alcoholic modernist, Bill, still mourning a wife lost to cancer; and the smart, with-it, Black woman professor, Yaz, who knows everything the older generation knows but also can connect with students and especially with students of color.  There are other people who show up for faculty meetings, but we don't learn anything about them in the six episodes.  And then there's David Duchovny, playing a version of himself, which is awesome!

The series gets some things about the academy right.  The actors are all superb.  Academics are eccentric.  Budgets are tight, and it is hell to be a faculty member placed in an administrative role these days.  Something's got to give, and often that something is a person's job.  Students can combine their  educations with their experiences to generate both a vocabulary and a theoretical apparatus through which they give expression to a lot of justified outrage.   Sometimes the remedy for that outrage entails real human costs.  These are serious subjects, and The Chair struggles to keep things light while addressing both the reality of student grievance and difficulty for faculty members trying to navigate between student demands and a university that is primarily trying to avoid bad publicity.  It also tends to reduce situations and behaviors to parodies.  Six, half-hour episodes do not provide enough space to develop an ensemble of characters.  There are only two students who figure in multiple scenes, and we get bare glimpses of who they really are.   Most of the students are there to deliver perfectly formulated critiques of institutionalized racism.

The series gets a lot more wrong, and I suppose that only bothers me because the series is set in my professional home.  Shows about the law get things wrong all the time, but I can move on.  In this series, I find it preposterous.  Bill and Joan's characters get fleshed out a bit, but they are not fully realized.  We get to know Joan slowly as a creature of the university, but we never see her in any other context.  We learn late in the series Eliot has a wife who was denied tenure and settled into domesticity.  It is a too little, too late attempt to humanize him.  I would love to see a series that explored academic eccentricity but also displayed the characters' unique passions and gifts so that viewers can really understand both what drew them to the academy and away from commercial life or social activism or whatever else people do, and why somebody thought they would make a good colleague.

Pembroke University, where the series is set, is neither fish nor fowl.  It seems like a research university, but we only see one graduate student.  The only courses on offer seem to be on Chaucer, Emily Dickinson, and Melville.  No non-canonical texts, only non-canonical riffs on canonical texts.  More importantly, composition, the bread-and-butter of English-department teaching, is mentioned only in the final episode when a doddering professor exclaims "I'm not teaching composition!"  Well who does?  There seem to be no Rhet/Comp professors, nobody teaches Communications, even though that program is often merged with English these days, and there is no indication that graduate students or adjuncts are engaged in teaching at all, except as a T.A. for Bill, who can't manage to show up for class sober or remember what course he is supposed to be teaching.   I could go on, but I need to justify this rant by talking about a contract.

If you haven't watched the series yet and plan to do so, read no further, as I am going to reveal the main plot-line as well as what happens in the final episode on the other side of the break.

A lot of the series concerns Bill, who parodically performs a Nazi salute as part of his introduction to a lecture on fascism and absurdism.  Students are for some reason recording his lecture on their phones (maybe this is a thing?), and the recording goes viral.  The students protest what they (absurdly) construe as an endorsement of fascism, and after getting caught in a fake apology ("I'm sorry if you were offended . . . " -- a great phenomenon for the show to feature and lampoon), Bill faces a disciplinary hearing, which becomes a kangaroo court.

The series quickly sweeps away any notion that tenure might protect Bill, and it wouldn't if his conduct were truly outrageous and if he didn't have the obvious defense of alcoholism and mourning his recently deceased wife.  Universities are actually quite adept at quietly making faculty disappear for a year or two (sabbatical, research leave, visiting positions) until the offended students have graduated or otherwise moved on to other causes. But the whole process seems to be on track to be resolved in a matter of weeks, and that's just not how the process works.  No mention is made of Bill's actual contract, only of his attorney who is apparently going to get him a very sweet pay-out.  But he turns down retirement in Paris because he loves teaching.  Maybe he does, but there wasn't much evidence in it in the six episodes I saw.  Viewers are supposed to indulge the fantasy that a university suffering a budget crunch would pay millions to be rid of an English professor who made a bad joke.

Equally absurdly, at the end of the series, the faculty votes out Ji-Yoon as department Chair, because the senior faculty thinks she is going to help the administration push them into early retirement.  Of course, if that were the case, then for that very reason, the administration would not permit the faculty to replace her.  Moreover, being a department Chair comes with a stipend which, in an English department might be paltry, but it would still be a contractual matter.  The university has entered into an agreement with Ji-Yoon, and it is working with Ji-Yoon to stanch the fiscal bleeds in the department.  Why would the administration agree to have a different Chair foisted upon it?  In any case, the university pays Ji-Yoon to be Chair, and she is not willingly breaching her contract.  Seems like the university should get to determine whether or not she should continue as Chair.  It's not clear where the series could go from here.  What can Joan do differently when she becomes Chair?

This isn't a contracts issue per se, but there's a lovely comic scene in which Ji-Yoon seems to have persuaded David Duchovny to fund the Dr. David Duchovny Chair in Beckett Studies (or something like that).  An administration might respond to this news in two ways.  The first option (unlikely) is that it would congratulate Ji-Yoon and heap upon her praise for her fundraising skills.  The second option, which seems likely based on my experience with former university administrations, is that the university would be angrier at Ji-Yoon than she has ever seen them.  "An endowed chair, that's a low seven-figure pledge," they will say. "But we were carefully cultivating Duchovny for a high eight-figure pledge or a low nine-figure pledge.  You got him to pledge a chair.  We were working towards a building!"  Whether or not any of it is true, the administrators would treat Ji-Yoon as a blundering academic with no experience in fundraising who had just cost the university millions of dollars in endowment.

I think the academy is dramedy gold.  David Lodge showed what one can do with this material in his academic trilogy.  The Chair mostly fails to capture the rich absurdity of life in the academy today.  Sandra Oh and the cast deserve better, and so do we.