News from the World of Mixed Martial Arts Contracts 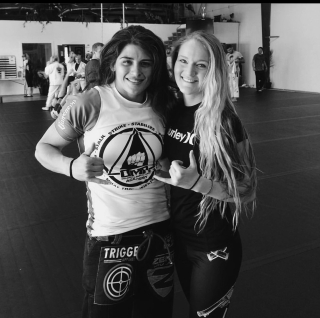 On the right in the photo at left is Jordan Kimball, who was one of my contracts students when she was a wee 1L.  She is pictured with her Mixed Martial Arts (MMA) coach Julia Avila.  I did my best to teach Jordan contracts law, and she is now  doing her best to educate me about the MMA world.

Julia Avila competes under the auspices of the Ultimate Fight Championship (UFC), the largest MMA organization, headed up by Dana White.  According to Jordan, its junior-level fighters like Julia get paid very little for their matches.  MMA Guru (in an annoyingly repetitious post), reports that while about 1/3 of MMA fighters earned six-figure salaries in 2018, a little over 1/3 earned less than $45,000.  The basic structure was (as of 2018) that fighters get paid about $3500 in base pay for their first three fights, which goes up to $5000 per fight thereafter.  Fighters also get a "win-bonus" that equals the base pay, so they are highly motivated.  Better-known fighters have the ability to draw up their own contracts, and obviously the money gets substantial at the top of the heap.  But the UFC is now hugely popular, and the vast majority of its fighters get paid a small fraction of top athletes in other sports.

UPDATE: the good people @TKO Combat Sports & Entertainment sent me a helpful correction.  The figures above are the sponsorship fees (uniform pay) per fight.  According to TKO, the minimum base pay per fight is $10,000, plus another $10,000 if you win.  So, a successful athlete can earn $23,500-$25,000 per match to start, which sounds like a good pay day, but for obvious reasons, one can't fight too frequently.  A little Internet research suggests that, barring injury, most athletes can only fight 2-3 times a year.

The base pay is somewhat higher than it was before the UFC entered into exclusive sponsorship agreements.  Before such agreements, fighters could earn money by wearing the gear of their individual sponsors.  Now, under the UFC contract, fighters are required to wear only the gear of the UFC sponsors in official UFC fights.  At least at the start, some athletes objected to the new sponsor system.

However, according to the The Manuel, apparently the big money comes from "fight of the night" and "performance of the night" bonuses within Dana White's sole discretion.  In 2020, such bonuses accounted for $4.6 million out of a total of $13 million in bonuses that UFC paid out.  As a result, as soon as fighters finish their matches, they hit social media to encourage their followers to deluge Dana White with messages advocating for their favorite fighter.  In such a system, athletes who criticize the pay structure are unlikely to earn bonuses from the man they are criticizing.  In addition, and not surprisingly, such prizes rarely go to women.

The UFC is the big dance of MMA.  There are feeder leagues in which MMA athletes can complete, but once they sign with the UFC, they cannot fight with any other organization.  The other organizations do not restrict private sponsorships, so for fighters coming up in the sport, jumping to the UFC entails risk.  The payout in early fights is going to be smaller, and you sacrifice private sponsorships.  While the athletes at the top of the sport can make millions of dollars, much like the top athletes in more traditional sports, young MMA athletes do not have the protections of a union, as exist in more traditional sports.  A rookie UFC fighter has no guaranteed minimum salary as would a rookie in MLB, the NFL, the NBA, etc.  And clearly the risk of injury is at least as great in the UFC as it is in the more traditional sports.

Thus the junior-level fighters, even if they make it to the UFC, have very little bargaining power and cannot publicly criticize Dana White, who literally controls the pursestrings.  All they can do is beg him to throw some of his largesse their way.  But they are not alone.  There are athletes at all levels within the UFC who complain about one-sided UFC contracts.

Thanks, Jordan, for all of the research on this post!   I regret that your work for the ContractsProf Blog will be even less remunerative than the UFC, but we place no limitations on your ability to seek sponsorships.