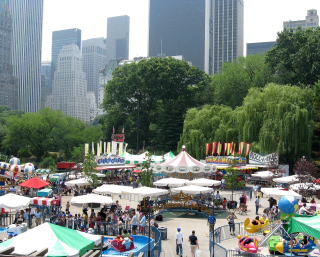 Soon after the January 6th assault on the Capitol Building in Washington, DC,  New York City attempted to terminate contracts with the Trump Organization to operate two ice skating rinks and a carousel in Central Park (left).  It seemed like that would result in an early end to the ice skating season during a pandemic.  New York parents were desperate for ways to divert their children and fend off boredom.  They delighted in an opportunity to ponder whom they found more despicable: their former President or their current mayor. The City blinked on that one.  Those contracts with the Trump Organization were due to lapse in April in any case, so the City chose to let them run their course and not renew them.

Now, according to the New York Times, the Trump Organization is suing New York City for allegedly wrongfully terminating a 20-year contract the organization had with the city. The lawsuit centers around the city-owned course in the Ferry Point section of the Bronx, called Trump Golf Links at Ferry Point. The Trump Organization was in the sixth year of operating the course since its opening in 2015.

The Trump Organization alleges  that “Mayor de Blasio had a pre-existing, politically-based predisposition to terminate Trump-related contracts, and the city used the events of January 6, 2021 as a pretext to do so.” A spokesman for the mayor, Bill Neidhardt, responded, saying: “Donald Trump directly incited a deadly insurrection at the U.S. Capitol. You do that, and you lose the privilege of doing business with the City of New York.”  Oooh.  That's a new wrinkle on a morals clause!

Actually, the mayor's spokesman should leave the lawyering to the lawyers.  They claim that the Trump Organization defaulted on its contracts when it failed to attract a major tournament to the course.  It is unlikely to do so in the future. The woke PGA has recently announced it would no longer be allowing a Trump-owned course in New Jersey host one of its major Tournaments.

The Trump organization claims it had no obligation to attract a major tournament. Rather, its only obligations was to maintain “a first class tournament quality daily fee golf course.”  It's legal papers include statements from professional golfers, including Dustin Johnson and Bryson DeChambeau, describing the course as “tournament quality” and  “first class.”  Not bad, but if they really wanted to impress, they should have characterized the course as "astonishingly excellent".

Thanks to ContractsProf Blog Intern, Sydney Scott, for her research assistance!