The Second Circuit recently upheld a lower court decision that a customer that had seen Subway’s print ad in a store was not bound by the referenced terms and conditions on Subway’s website.  The plaintiff, Marina Soliman, was in a Subway sandwich shop when she saw an in-store, print advertisement offering special deals if she texted a keyword to a provided code.  She did and Subway began to send her text messages with a link to an electronic coupon.  She alleged that she texted Subway to stop sending her more messages but that she continued to receive them so she sued, claiming a violation of the Telephone Consumer Protection Act (“TCPA”).  Subway moved to compel arbitration pursuant to its website terms and conditions.  It claimed that because it’s in-store advertisement included a reference to its website terms and conditions which contained an arbitration clause, that Soliman was bound to bring any disputes in an arbitral forum.

Soliman is not bound by the arbitration clause contained in the terms and conditions at issue.  More specifically, Subway has failed to demonstrate that such terms and conditions would be clear and conspicuous to a reasonable person in Soliman’s position for the following reasons:  (1) Subway failed to provide evidence regarding the size of the advertisement at issue, or the print size contained within that advertisement; (2) the reference to ‘[t]erms and conditions’ was buried on the advertisement in a paragraph that was printed in significantly smaller font relative to the other text on the advertisement, and the reference itself was surrounded by a substantial amount of unrelated information; (3) the advertisement only vaguely referenced ‘[t]erms and conditions,’ and did not state that a consumer would be agreeing to those terms if she sent a text message to Subway’s short code, nor did it otherwise direct the consumer to such terms; (4) access to the terms and conditions on the Subway website required Soliman to type in the URL text provided on the hard copy print advertisement into an internet browser on her cell phone or some other device with internet browsing capabilities; and (5) once linked to the Subway website, the heading stated that it contained ‘terms of use for this website,’ thus potentially suggesting to a reasonable person (searching for conditions of the promotional offer) that the website did not contain any terms or conditions beyond those relevant to the use of the website.”

The court concluded that this “combination of barriers” led it to conclude that the terms and conditions were not “reasonably conspicuous under the totality of the circumstances and that a reasonable person would not realize she was being bound to them by texting Subway to receive promotional offers. 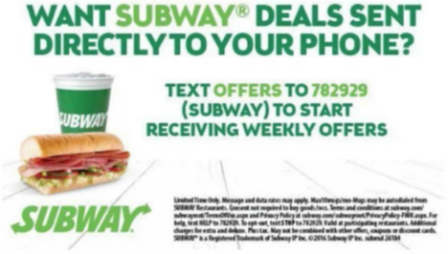 The opinion is informative – providing insight into what makes notice conspicuous (or not) - it even contains a colorful image of the actual print advertisement (see above.  Can you see the reference to the Terms and Conditions?).  The case is another example of how courts have become much more realistic about how a “reasonable” person interacts with T&Cs.

Unfortunately, the linked article from Law360 is paywalled. And, while enough of the article is still visible to reveal a link to the underlying opinion PDF, that can't be accessed either. Here are links directly to the opinion and a Bloomberg Law article, which AFAIK isn't paywalled, the latter in case additional coverage is desired.

The quoted summary with numbered points is quite helpful and informative, as is the rest of the opinion like you noted. I wonder how influential it will be given that it's applying state law from somewhere completely outside the circuit. But I agree the reasoning and result are encouraging and welcome. It's also interesting that you have this as the product of a panel including Jacobs (quite conservative, although sometimes unpredictable) and Bianco (Trump appointee, decidedly conservative, fairly contentious CA2 confirmation). Maybe the state-law wrinkle lowered the stakes a bit.