According to this news article, a French citizen, Léone-Noëlle Meyer, has spent decades trying to regain control over paintings, including the Pissarro at issue (below, right), a Picasso, and a Renoir, that were owned by her adopted parents before the Nazis expropriated them.  Ms. Meyer was born in Paris in 1939.  In 1942, her mother and grandmother were sent to Auschwitz and she was placed in an orphanage.  She was adopted in 1946 by Yvonne Bader, the daughter of the founder of a celebrated art gallery.The painting is currently on loan at the Musée d’Orsay, but it is due to be shipped back to its current owner, the University of Oklahoma(!).  Last week, Ms. Meyer abandoned her attempt to recover the painting.  The reason?  She signed a contract. 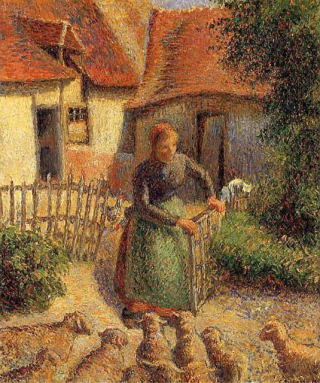 The headline of the main story linked to above describes her as an "heiress."  Who puts that on their resumé?  Wikipedia describers her as an heiress but also as a pediatrician, businesswoman and philanthropist.  She was as pediatrician for 45 years, so why not go with that?

French law provides for the repatriation of Nazi-looted art owned by French citizens.  For reasons that are unclear, Ms. Meyer could not find a French gallery willing to take her Pissarro on a permanent basis.  Perhaps the price she was asking was too high, and most people descended from the original owners of Nazi-looted art cannot keep that art themselves because the insurance costs are too high.  Moreover, one wants such art on public display.

Five years ago, Ms. Meyer agreed to allow the painting to split its time between French galleries and the University of Oklahoma.  The painting was to move once every three years.  Now, Ms. Meyer concedes that she can find no French gallery willing to assume the costs of the transport.  Her only recourse was to challenge the enforceability of the contract.  She attempted to argue that she was coerced and that her American attorney left her with no choice but to agree to the Pissarro-sharing agreement.  That argument likely was not a winner, and with no French gallery willing to participate in the deal, Ms. Meyer had not choice but to acquiesce in the University of Oklahoma's unencumbered title to the painting.

Sad outcome.  One upside.  I'll be seeing it soon.

I was motivated by your discussion of heiress to see if anyone had delved into whether it’s a biased term against women. Strangely though, some initial searching didn’t turn up any useful results. Maybe it’s a fruitful area for research and publication. I note at least for parity that Wikipedia describes Lachlan Murdoch as a “mass media heir”—but T*p oddly doesn’t have a similar description as a “NYC real estate heir”