If You Believe This, I Have an Invisible Sculpture to Sell You

According to this story on moneycontrol.com, Italian artist Salvatore Garau sold an invisible sculpture at auction for $18,300.  The piece, according to moneycontrol.com, is titled Lo sono, which translates as I am.   According to hypebeat.com, the piece is titled Io sono, which also translates as I am.  Either way, is it?  Is there an "I"?  Is it the invisible sculpture or the very visible "sculptor" pocketing his earnings.  The buyer, who has chosen to remain anonymous, if not invisible, will receive a certificate of authentication, signed and stamped by Salvatore Garau, as proof of the purchase and that the purchaser, and only the purchaser, owns this non-existent work of art. 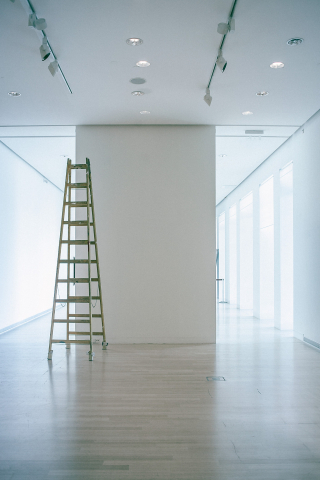 One nice thing about buying invisible art, it is easy to store and display, or so one would think.  But Garau specifies that it is to be displayed in a 5×5-foot square  "private space free from obstructions, where lighting and climate control are not required."  One can imagine it, for example, adorning the space featured at left.  Actually, it was there.  But then it was stolen!  Imagine explaining that to the insurance adjuster.

Unsophisticated people might think that the sculpture is actually nothing.  Nothing at all.  Garau disagrees: It is a vacuum, and he elaborates, “The vacuum is nothing more than a space full of energy, and even if we empty it and there is nothing left, according to the Heisenberg uncertainty principle, that 'nothing' has a weight…Therefore, it has an energy that is condensed and transformed into particles, that is, into us.”

You might be thinking something along the lines of "That's not how the Heisenberg uncertainty principle works."  But you are not a conceptual artist.  I am not a conceptual artist. And Garau knows what he is doing.  He previously installed "Buddha in Contemplation" in the Piazza Della Scala in Milan, Italy, and you can see it there if you check him out on Instagram,  Well, you can't see it exactly, because it's invisible, but according to the video, it exists and will remain in that place forever.

I pity the poor lawyer who has to depose the artist in an attempt to determine whether or not the sculpture is a good that should be governed by the UCC or the CISG.

Garau might have some concern that his buyer, experiencing remorse, might complain, "Hey, you promised to deliver an invisible sculpture, but you have delivered nothing."  Garau's response might be that in delivering nothing, or at least nothing tangible, he had performed as promised.  The promise to deliver something equivalent to nothing might seem illusory.  Presumably, Garau promised to deliver not only an invisible sculpture but also a certificate of the authenticity of that unique piece of art.  Garau's obligation to deliver the certificate, I think, saves the contract from being illusory.

This seems appropriate, although I don't know what Aphrodite has to do with anything.  But Wall Street does involve making something out of nothing: witness Dogecoin.  And I think the phenomenon of someone paying $18,000 for an invisible sculpture may have a connection to Bitcoin, Dogecoin, NFTs, Gamestop, AMC, and other extreme investing schemes.  There seems to be a lot of money lying around with nowhere to go, so it goes into stuff that makes no sense.  I think I've seen this movie before.  It's called The Big Short.

Thanks to Alyssa Cross for her research assistance.

Well, if John Cage can write a piece called 4'33" of silence, why can't an artist create an invisible sculpture or painting?

Unquestionably, he can and has. I just don't care for it.

I care more for John Cage's composition. I don't know if there are studio "recordings" of 4'33", and I don't know if he tried to copyright it or sell it. People still do "perform" it (https://www.youtube.com/watch?v=JTEFKFiXSx4), but I admit I find that rather tired. Everybody in the audience ought to be in on the joke (a very serious joke). I suppose it can be poignant, if only as a tribute to the original event.

In any case, I have been told that the recording of the original performance is interesting. All one hears are the sounds of the audience, which start with the usual snuffling and semi-suppressed coughing one hears at classical recitals and then rises to a confused buzz and murmuring. The composition is an exercise in sociology.
Because I studied Merce Cunningham's dance method and saw many performances by his company, I've heard a lot of Cage. There was a serious mind at work there. Listening to Garau talk about his creations, I sense more Salieri than Mozart.