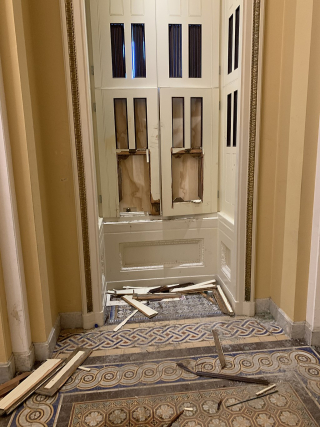 Back in January, we posted about reports that John Eastman had resigned his faculty position at Chapman University and both parties agreed not to pursue legal remedies.  Now, as reported in Colorado Politics, it appears that Professor Eastman's departure from the University of Colorado Boulder (the University), where Eastman was a visiting professor, is a bit rockier (get it?).

Professor Eastman had been hired as a visiting scholar at the Bruce D. Benson Center for the Study of Western Civilization.  He was slated to teach two courses per semester in 2020-21.  After he  gave a speech at a pro-Trump rally in Washington, D.C., that immediately preceded the assault on the Capitol Building on January 6, 2021, the University canceled his classes for the Spring semester, citing low enrollments.

On April 29th, the University explained its actions with respect to Professor Eastman as follows:

The campus's decisions regarding Professor Eastman were made in accordance with its university policies concerning freedom of expression and academic freedom. Consistent with First Amendment principles and the university’s policies, Professor Eastman is able to speak on any subject he wishes and pursue his scholarship. The university has taken no action that would deter a reasonable person from engaging in free speech, and Professor Eastman continues to express his views in writing, John Eastman’s Statement on His Retirement from Chapman University's Fowler School of Law - The American Mind, on television, Now-Retired Law Professor John Eastman Says His Words at Trump’s ‘Save America’ Rally Did Not Incite U.S. Capitol Siege (msn.com), and at in-person events, What Really Happened? An Insider’s Perspective on Representing the President and Claims of Election Fraud.  The university, however, is not constitutionally obligated to have him serve in a representational capacity when he exercises his right to free speech.  Professor Eastman was not suspended.  The College of Arts & Sciences canceled his spring courses for low enrollment in accordance with its policies. Provost Moore appropriately relieved him from performing outreach functions on behalf of the Benson Center, because his continued performance of those duties would likely cause disruption and harm to the center.

The University continued to pay Eastman his $185,000 salary.  He contends that the reasons given for the cancellation of his classes were pretextual, as other classes offered through the Benson Center also have very low enrollments.

Professor Eastman seeks $1.85 million in damages, representing his losses due to reputational harms done to him by the University.  He claims that the University's actions will prevent him from earning a salary through teaching for the next ten years.  It is hard to square that allegation with this statement that Professor Eastman published in The American Mind on January 14, 2021:

I am currently on leave from Chapman while serving as the Visiting Professor of Conservative Thought and Policy at the Benson Center for the Study of Western Civilization at the University of Colorado Boulder, so my mid-year retirement will not have any impact on my Chapman students. Once that visitorship is concluded, I plan to devote my full-time efforts to the Claremont Institute and its Center for Constitutional Jurisprudence, which I direct.