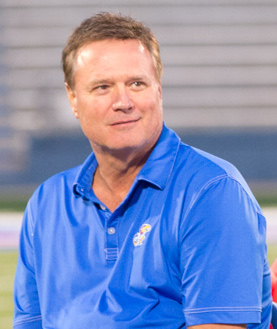 According to ESPN.com, the University of Kansas (KU) entered into a "lifetime contract" with Bill Self (pictured), the school's head basketball coach.  The contract has an interesting structure, one I'd never heard of before.  Its stated term is five years, but at the end of each year, another year is automatically added.  On any given day,  Coach Self has something less than five years remaining on his contract, and yet the contract never ends.

Unsurprisingly, there are no links to the contract.  I suspect there are contractual outs on both sides.  According to ESPN, there were rumors recently that Coach Self might move to the NBA.  Would he thereby be breaching his lifetime contract?  If so, what would be KU's measure of damages?

On the other side, KU has been disciplined following an FBI investigation into alleged payments to two former players from Adidas.  What contractual outs does KU have should the NCAA decide to discipline Coach Self, given that there was a finding of violations for which Coach Self bears some responsibility?  Can KU set aside the lifetime contract based on a morals clause?  What if Kansas (known to the cognoscenti as "the Jayhawks") goes winless in conference for a year?  For two years?  Unlikely, but no doubt the Mets thought they were getting a sure thing when they signed Bobby Bonilla.

This contract is big news in Kansas this year. FYI. "UK" usually connotes Kentucky, and the abbreviation used for University of Kansas is always "KU" (It's part of the cheer: "Rock Chalk Jayhawk, Go KU!"

Well, there's some egg on my face, but that's nothing unusual. Thanks, Andrea, for the correction. I will fix it in the post. That said, I know every word in the cheer, but I have no idea why that is a cheer or why the cheer would be any less effective (as a cheer) if it ended with "Go UK!"? It doesn't even rhyme (no disrespect to your cheer, I'm just trying to work through the anthropological moment of complete mutual incomprehension).

I just wish the contract was oral so we could get a great statute of frauds case out of it after the coach gets fired.