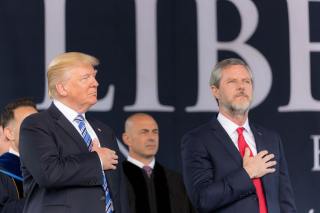 resigned as President and Chancellor of Liberty University, a Christian educational institution founded by his father.  As reported in the Washington Post, he was to receive $10.5 million in compensation in exchange for resigning and agreeing not to work for another university for two years.  Although Falwell stated that there was no legal "cause" for his resignation, reasonable minds might differ about that.  The Post points to his allegedly racist and anti-Muslim remarks, and his attempts to silence dissent at Liberty, but that conduct does not seem to have been the source of the problem.  The complaint does not reference it.

Rather, Liberty's complaint indicates that the Board called for Falwell's resignation because he had displayed erratic behavior, posing for revealing photos in questionable taste and showing signs of alcoholism severe enough to warrant treatment.  Falwell himself stated that his wife had had an extramarital affair and that he was resigning, in part because he was bored and in part because he did not want his wife's conduct to reflect poorly on the university. 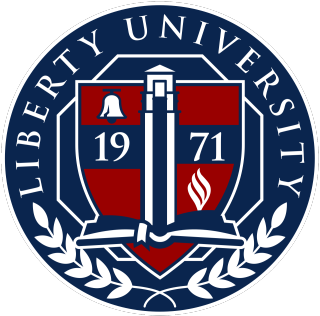 Liberty now seeks to recover Falwell's $10 million severance payment.  Most of Liberty's allegations relate to rather tame but also highly peculiar episodes of debauchery just scandalous enough to be inappropriate for a university president and certainly off-brand for Liberty.   The most important allegation is that Falwell concealed from the university his wife's affair with Giancarlo Granda and also concealed Granda's alleged blackmail of the Falwells, a scam that allegedly went on for years.

Count one of the complaint alleges breach of contract/conversion.  I am not sure why those two causes of action are lumped into one.  The allegations in that count suggest other causes of action as well, such as theft of trade secrets, misappropriation of funds, and breach of fiduciary duty, but perhaps under Virginia law, all of those are captured under breach/conversion.  The factual allegations are that Falwell did not use his Liberty e-mail to conduct Liberty business, that he shared confidential information with third parties, and that he stored information relating to his business dealings on Liberty's behalf on servers to which Liberty does not have access.  Liberty estimates its damages relating to this claim at $250,000, a number that it acknowledges it may need to revisit.

Count two alleges breach of fiduciary duty, but again there seem to be several breaches here.  First, when Liberty negotiated a generous compensation package with Falwell in 2019, Falwell failed to disclose that his wife had engaged in an extramarital affair and that the family was being blackmailed by her former paramour.  Had Liberty known these facts, it would not have entered into the 2019 agreement, which required the generous severance package that Liberty now seeks to recover.  Falwell also failed to disclose his alcoholism, which caused him to engage in conduct harmful to Liberty's reputation.

In Count three, Liberty repeats its prior allegations but now characterizes them as a conspiracy under Virginia statutory law.  The statute entitles Liberty to treble damages, and thus Liberty seeks to recover $30 million instead of just $10 million, plus punitive damages.

Ordinarily, it would be an odd thing to require a party to a contract to disclose that their spouse had engaged in an extramarital affair and that the couple was now being blackmailed by a jilted lover.  Arguably, it is not odd here, as Liberty's reputation is linked to Falwell's.  I'm not sure how a court can draw that line, but perhaps the Martha Stewart case is instructive.

It's a bit hard to tell what is going on here.  After he was terminated, Falwell sued Liberty for defamation.   Falwell took a voluntary dismissal of the suit, without prejudice to re-filing.  Liberty appended his complaint to its complaint, and Falwell's complaint is the source for many of Liberty allegations in its suit.  Oops.  One would expect that both parties would be happy to move on, rather throwing bad money after other bad money.  None of this reflects well on the board.  After all, why would any university promise to pay a president departing under a cloud $10 million?  Falwell's lavish lifestyle and vacations could not have entirely escaped the attention of the board.

Perhaps alcoholism is more of a symptom than a cause.  Where did I read something about a camel and a needle?