Guest Post by Tanya Monestier on Amazon as a Seller of Marketplace Goods, Part I

Amazon as a Seller of Marketplace Goods Under Article 2: Part I
Tanya Monestier

Last fall, a student in my Sales class sent me the following email, “I hope you are having a wonderful weekend. I came across this article this morning and found it pretty interesting. I thought you may find it interesting as well.”  The article dealt with Amazon’s liability for defective goods sold on its website.  I was horrified to learn that goods sold on Amazon had caused serious personal injury, including blindness, severe burns, and death, and that Amazon was trying to escape liability.  In one case, Amazon oh-so-generously offered a $12.30  refund to a customer after a laptop battery exploded, causing her to be hospitalized for several weeks with third degree burns. I replied, “Very interesting, thanks for sending.  Got me thinking about why there are not more UCC lawsuits against Amazon.  Apparently, at least in some cases, Amazon is not considered a ‘seller’ because they never receive title to the goods.  I’ll send you a case I found.”  Over the next couple of months, I kept coming back to the idea that it was crazy that Amazon could avoid liability in products liability suits just by refraining from taking title to the goods it sells on its website, especially considering that a large number of these third party goods are warehoused in Amazon facilities.  It seemed that Amazon was avoiding liability on what most people would consider “a technicality.”  So was the genesis of my current article, Amazon as a Seller of Marketplace Goods Under Article 2, forthcoming in Cornell Law Review.  In this post, I will briefly present the title arguments I explore in the Article.  In a subsequent post, I will explore the argument made in the latter half of my paper: that Amazon should be estopped from claiming that it is not the seller of third party goods on its platform.

Amazon’s business model is unique in that it sells goods directly to buyers, and it provides a “marketplace” where other sellers can sell their goods on Amazon—all through the same online platform.  In other words, Amazon wears two hats, even though it operates only one online interface.  It wears a “seller” hat in some cases, and it wears (or claims to wear) a “service provider” hat in other cases. One publication refers to this unusual business set-up as “half-platform, half-store.”  Interestingly, even in cases where Amazon is selling third-party goods, it often plays an outsized role in getting those goods into the hands of customers.  Under its Fulfillment by Amazon program, third party sellers send their goods to be warehoused in Amazon facilities, and Amazon takes over from there.  Amazon stores those goods, packages those goods, ships those goods, receives payment for those goods and provides all customer assistance for those goods.  The third party seller never has any contact with “their” goods again.

When Amazon functions as the seller of goods in its own right, it is prima facie liable for selling unmerchantable goods under Article 2 (leaving aside any disclaimer issues).  When Amazon provides a marketplace for third party sellers to sell their goods, however, Amazon has largely escaped liability.  This is because Amazon purports to avoid taking title to third party goods in its Amazon Services Business Solutions Agreement, which governs its relationship with third party sellers.  If Amazon does not have title, so the argument goes, it cannot be a “seller” under Article 2.  Courts have largely bought Amazon’s title argument, hook, line and sinker.  In my Article, I make two separate title-based arguments: one legal, one factual.  First, I argue that Article 2 does not necessarily require a party to hold title to goods in order to be considered a seller.  Second, I argue that who actually has title to goods sold on Amazon is less than clear.

Let’s start with the legal argument.  Title may not be an absolute pre-requisite to “seller” status under Article 2.  Amazon may be liable regardless of whether it technically held title to the third party goods sold on and through its platform.  For instance, § 2-314 imposes a warranty of merchantability on a “seller” who is “a merchant with respect to goods of that kind.”  The term “seller” is defined in § 2-103 as “a person who sells or contracts to sell goods.”  Notably absent from this definition of “seller” is the mention of title.  That is, § 2-103 does not define a “seller” as one who transfers or contacts to transfer title to goods to a buyer.  Instead, the section refers generically to a “seller” as one who “sells.”  The word “sells” is not defined.  Without doing a deep dive on statutory interpretation, suffice it to say that there is some wiggle room for ascribing “seller” status to those who sell, but do not necessarily hold title to goods.  This is particularly true given the comment to § 2-101 which makes it clear that Article 2 seeks to “avoid making practical issues between practical men turn upon the location of an intangible something [title], the passing of which no man can prove by evidence . . .”  Or, as so eloquently stated by Karl Llewellyn: “Nobody ever saw a chattel’s Title. Its location in Sales cases is not discovered, but created, often ad hoc.” 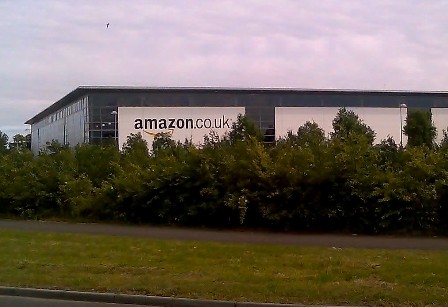 Now for the factual argument: who has title to goods sold on Amazon is actually not so clear.  Thus, even if title is required to ground “seller” status under Article 2, it may be that Amazon has title to some goods sold by third party sellers.  Amazon claims that it avoids taking title to third party goods through the Amazon Services Business Solutions Agreement it forces upon its sellers. This document is over 17,000 words in length.  To get more of a reference point, this amounts to approximately 34 single-spaced or 68 double-spaced pages.  The word “title” appears a mere eight times in this agreement, only five of which are relevant for our purposes.  It is never clearly laid out anywhere in this document that the third party seller retains title at all times and/or that Amazon does not take title to the goods in question.  One would think that the biggest company in the world would be able to draft a clear and unambiguous title provision in its contract with third party sellers.

Amazon steadfastly holds to the argument that because it does not take title to third party goods, it cannot be a “seller” of those goods.  But given the commingling provision, truly, who even knows what goods Amazon is sending to buyers?  Goods, real and fake, Amazon-owned and third party-owned, are all lumped together in one large bin (literally and figuratively).  It is hard to argue that you do not have title to goods when you have—by your own design—lost track of which goods belong to which seller.

Amazon’s title argument is a disingenuous attempt to avoid liability for goods it chooses to sell, and profit from, on its platform.  And zooming out from the minutia of title, it is clear that Amazon casts itself in the role of seller with respect to all of its transactions.  From a customer’s perspective, everything about the Amazon experience suggests that Amazon is the seller of the goods being purchased.

I will delve into this aspect of the Article in tomorrow's post.