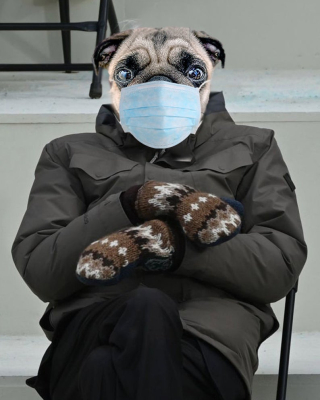 According to the Business Insider, an arbitrator ordered Uber to pay $1.1 million in damages to Lisa Irving, a San Francisco Bay Area resident who is blind and relies on her guide dog, Bernie (pictured, as we imagine him), to help her get around.  Irving alleged that Uber drivers either refused to give her rides or harassed her because they did not like Bernie.   As a result of being left stranded by Uber drivers, Irving alleged that she was late for work, which contributed to her getting fired.

She complained to Uber, to no avail.  Uber attempted to evade liability based on its drivers' status as independent contractors.  The arbiter did not buy it.   Nor did the arbitrator find convincing Uber's claims that it trains drivers to accommodate people with disabilities.  Rather, the arbitrator found that Uber, in some instances, coached drivers "to find non-discriminatory reasons for ride denials," and kept using drivers despite complaints that they discriminated against people with disabilities.

The arbitrator found that Uber was responsible for its drivers' conduct and awarded Ms. Irving $1.1 million in damages relating to Uber's violation of the American with Disabilities Act.