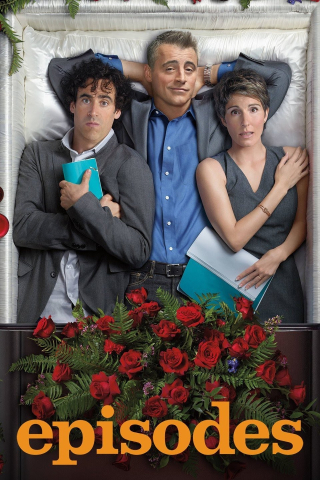 Episodes is easily on my list of top ten favorite sitcoms of all time.  Perhaps top five, but it's crowded at the top.  I was thinking about the show and regretting that I wasn't blogging while I was watching it, because there was a lot of blog fodder in that show.

I've got a bone to pick with the show runner who came up with all the material involving Sean's (Stephen Mangan, pictured far left) former writing partner, Tim (Bruce Mackinnon).  I don't know about the intellectual property issues between Sean and Tim.  Those seem pretty interesting, but the real mess involves Eileen (Andrea Rosen), who acts as agent for Sean and Berverly (Tamsin Greig, near left) but also represents Tim.  I would think some sort of fiduciary duty and conflict of interest rules would apply, since their interests are clearly adverse.

But the main issue that I've been thinking about lately is mitigation of damages in a Parker-like context.  Sean and Beverly come over from England because the delightfully slimy Merc Lapidus (John Pankow) entices them by promising to let them write an American version of their hit comedy, Lyman's Boys.  That show stars a droll English headmaster at a boarding school.  Merc represents that the actor who played Lyman in the English series would also star in the American version.

And then the changes roll in.  The English bloke is rejected and replaced with Matt LeBlanc, who lacks the headmaster's reserve and urbanity.  The boarding school becomes a public school, and the headmaster becomes a hockey coach, which is much more fitting for Matt LeBlanc's character, as played, with bottomless self-effacement, by Matt LeBlanc.  Sean and Beverly ride it out, and it's a very bumpy five seasons, mostly because Sean really wants to make it in Hollywood.  Beverly sours immediately.  But the first season provides a great set of Parker-esque hypos.  At what point can Sean and Beverly back out of their contract with the network?  How can the network mitigate?  Is a show (Pucks) about a crass hockey coach who is constantly hitting on the sexy school librarian a good substitute for a show (Lyman's Boys) about an erudite headmaster at a school with a significant librarian character who happens to be a lesbian?