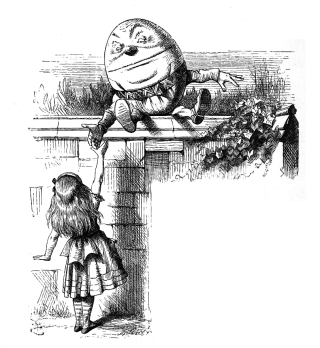 As Colleen Flaherty writes here in Inside Higher Education, John Carroll University, like many small colleges and universities, is having a hard time financially.  It has already terminated two tenured professors and eliminated its Art Department.  Further cuts would ordinarily require a finding of financial exigency.

But John Carroll gets words to mean whatever it chooses them to mean.  Financial exigency now means a projected budget shortfall of six percent or more and a cloudy future.  This is termed a "budgetary hardship."  You might think that the question is how can words mean so many different things, to which John Carroll (now Humpty Dumpty) responds, "The question is which is to be master -- that's all."

Humpty Dumpty University's administration has proclaimed a new policy permitting termination of tenured faculty upon a determination of a budgetary hardship, and it has issued a new faculty handbook that eliminates a right of appeal from such terminations.  The old handbook, Humpty Dumpty says, was outdated.  The new policies, on the other hand, "prioritize the retention of tenured positions and the preservation of academic freedom, to which the board is fully committed.”

Faculty members are impressed.  They had no idea that words like "tenure" and "academic freedom" were consistent with policies that permit the non-appealable termination of full-time faculty members based on unilateral declarations of economic hardship.

"That's a great deal to make words mean so many different things," the faculty ventured in a thoughtful tone.

"When I make a word do a lot of work like that," said Humpty Dumpty, "I always pay it extra.  Ah, you should see 'em come round me of a Saturday night," Humpty Dumpty went on, wagging his head gravely from side to side, "for to get their wages, you know."

Well, at least somebody is getting paid.

Very nice—I mean this post of course, not what HDU is doing.