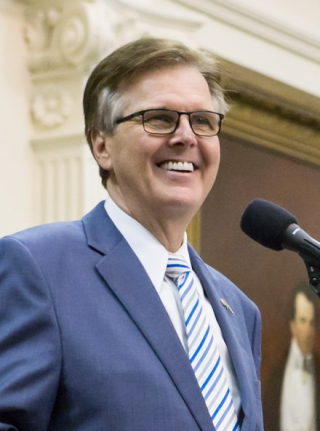 This week's Top Tens features at #5 and #4 on the two lists this article by Michael Conklin.  The article assesses the enforceability of this offer from Texas Lieutenant Government Dan Patrick (Patrick, pictured).  In short, Patrick offers a minimum of $25,000 and up to $1 million to "anyone who provides information that leads to an arrest and final conviction of voter fraud."  There seem to be no geographic limits on the offer, so anyone who discovers evidence of voter fraud anywhere in the country should be incentivized to provide that evidence to Patrick and claim the reward (following arrest and conviction of course).

Professor Conklin's article explores the enforceability of the offer.  I have no doubt that this is an enforceable offer to enter into a unilateral contract.  As far as Professor Conklin (and I) could discover, the offer has not been withdrawn.  Unilateral offers can be withdrawn at any point before completed performance.  Patrick could try to withdraw at any point before arrest and conviction, but if that case came before me as a judge, I would construe the performance as completed upon delivery of the information that led to the eventual arrest and conviction of  the wrongdoer.

According to Patrick, "The Democrats have no one to blame but themselves for creating suspicion of final vote totals."  Perhaps so.  But the fact that nobody anywhere in the country has taken up Patrick's offer should long ago have alleviated any such suspicion.  In fact, having gone through a personal bankruptcy in 1992, Patrick should be somewhat risk averse.  Why would he risk his own money if he thought there were a strong likelihood the widespread voter fraud affected the outcome of the 2020 Presidential election?

Can it be that something other than concern over voter fraud motivated his press release?  Well, the press release encourages viewers to visit Patrick's website for more information.  I could find no information on the website about voter fraud, but I did find information about how to contribute to Patrick's "campaign war chest," which already contains over $19 million.

Sounds like I need to take a trip to Georgia.

Maybe you'll have better luck than Bobby Christine, the Trump-appointed U.S. Attorney for Northern Georgia (or all the GOP state officials who also found no evidence of voter fraud).

Recall that an exception to the general rule that the offeror can revoke anytime prior to acceptance exists when an offeree of a unilateral offer begins performance—and must be given a reasonable time to accept / perform.

Remember that a unilateral offer will lapse after a reasonable time. Do we actually know that no one has claimed the offer so far? It's not payable until conviction, I think.

I'm sure they're on the verge of turning that up that juicy voting fraud evidence. But first they just have to locate the final resting place of Jimmy Hoffa, track down those missing Vermeers, and generate viable cold fusion. I hear they have their best people working on it around the clock. That includes Kris Kobach, because he did such a tremendous job last time.

Also, does it say anywhere specifically that it's coming out of Patrick's own pocket? Given that he's a grifter extraordinaire, I have to assume he's making sure that someone else would be on the hook. But let's be serious, there's no meaningful risk to him. For starters, $1m is a ceiling, but the minimum is only $25k. While that's certainly not peanuts, it's not a life-changing sum either. And is there even a real danger of paying out the $25k? Just ask KK (too bad his middle name isn't Kevin, that would be so fitting) how likely that is. So Patrick gets to have it both ways. On the one hand, by making these grand pronouncements, he receives kudos--and more importantly, donations--from his base. On the other hand, not only does he not have to do a lick of actual work--because the fraud hunting is outsourced to all those tipsters who surely were just biding their time until the award was announced--but also, like I said above, the risk of having to make a payout is effectively nonexistent.

Maybe one could argue that there's a downside if nobody ever claims the award, because then Patrick looks foolish. But he actually wins in that case too. He can just say it proves his point that the alleged fraudsters have worked so deviously to cover their tracks.

Finally, the offer was posted in Nov. last year, but it's still easily accessible on his website. So I don't think a reasonable time is going to expire at least while that remains the case. But again, I doubt he's too worried about it, for the reasons I gave above.

(PS, is it just me, or does Patrick give off the vibe of someone who sleeps in a coffin and never gets near holy water?)

Great to see all these comments!

Chris, I wonder how you think the exception works in this case. Clearly one cannot "accept" this offer by simply looking for voter fraud. If that were true, it could never be revoked. I think acceptance would have to be through delivering the evidence to Patrick, and at that point, I agree with you, it is too late for him to revoke.

Frank, it is certainly possible that someone has brought Patrick evidence and we haven't learned about it, but that seems unlikely to me. Patrick's stated goal was to support then-President Trump in his efforts to overturn the election. Sitting on colorable evidence of voter fraud would not further that goal. He claims the additional aim of enhancing faith in our democratic processes, but again, sitting on colorable evidence does not further that goal either. But in any case, I do not take his claims at face value. I don't think he is seriously interested in pursuing voter fraud claims for any purpose other than signaling to election fraud truthers that he is on their side. From that perspective, he should be shouting from the rooftops every time he hears of election fraud.

As to the offer lapsing, I think hardreaders answers that by saying that if it is still up on Patrick's website, the offer is still open.