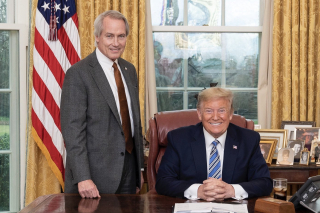 According to the New Yorker staff writer Charles Bethea on Twitter, students at Mercer Law School have been calling that institution to remove the name of Lin Wood (pictured with his BAE) from a courtroom in the school.  Apparently, Mr. Wood Zoom bombed a call organized to discuss the matter under the pseudonym Motley Crew.   Wood uploaded a recording of the call to Telegram, which is apparently where you go when you have been banned from all the social media platforms that I have heard of.  Now it is also available here.

Bethea shares students' accounts of the call.  According to the students, Mr. Wood abused the Dean, who responded graciously, shared some QAnon-supported conspiracy theories, promised to share evidence of voter fraud in the coming week, and threatened to demand the return of his $1 million donation to the school should they take down his name from the courtroom.  Wood's account is somewhat different, as he is threatening to sue the Dean for defamation.

The potential conflict between Wood and his alma mater  touches on the law on contracts; more specifically, the law of charitable subscriptions.  Recall that in the Allegheny College case, Judge Cardozo observed:

The promisor wished to have a memorial to perpetuate her name. She imposed a condition that the "gift" should "be known as the Mary Yates Johnston Memorial Fund." The moment that the college accepted $1,000 as a payment on account, there was an assumption of a duty to do whatever acts were customary or reasonably necessary to maintain the memorial fairly and justly in the spirit of its creation.  The college could not accept the money, and hold itself free thereafter from personal responsibility to give effect to the condition.   More is involved in the receipt of such a fund than a mere acceptance of money to be held to a corporate use. The purpose of the founder would be unfairly thwarted or at least inadequately served if the college failed to communicate to the world, or in any event to applicants for the scholarship, the title of the memorial. By implication it undertook, when it accepted a portion of the "gift," that in its circulars of information and in other customary ways, when making announcement of this scholarship, it would couple with the announcement the name of the donor.

If Mr. Wood made clear that naming a courtroom for him was a condition of his $1 million gift, he may cite the great Cardozo as supporting his claim.  His ability to do so would of course turn on the nature of his agreement with Mercer, details of which have not been shared with the blog.   However, in the recording, the Dean characterizes the gift as subject to a contractual condition that the school would name a courtroom for Mr. Wood in exchange for his gift.  The Dean says that the contract contained no term of years and no "morals clause" that would enable the university to drop Mr. Wood's name from the courtroom.  The Dean's explanation of the contractual issue seems to be an attempt to help aggrieved students understand why the university was not entirely free to remove Mr. Wood's name from the courtroom.

In any case, Mercer might want to get ahead of the game and use this moment in the spotlight as a fundraising opportunity.  Whether or not it returns the money, it can still ask its alumni to donate so that it can do so if it must without incurring any extra financial stress.