According to this article in the L.A. Times, John Eastman, who has recently represented the President in connection with numerous lawsuits challenging election results, has agreed to resign his position as a professor of law at Chapman University.  Professor Eastman joined Rudy Giuliani at the "Save America" Rally on January 6th.  The L.A. Times reports that, at that rally, he made unsubstantiated claims of voter fraud in connection with the 2020 Presidential election.

More than 160 faculty members called for the University to take action, but Chapman's President Daniele Struppa refused, citing the limitations of his powers as university president and the important principles of academic freedom and contractual rights.  President Struppa's statement is worth quoting at length.

I am not the Emperor of Chapman University, nor I am the Supreme Leader of Chapman University. I am the President of the university, and as such, I am bound by laws and processes that are clearly spelled out in our Faculty Manual. The Faculty Manual, despite its common name, is actually a contractually binding document that faculty, administration, and Trustees have agreed upon. This document contains the rules that determine how faculty are hired, and how they are disciplined, up to and including termination. The documents spell out cases under which such actions can be taken, and what process must be followed. The process includes a prominent role for the Faculty Personnel Committee and affords the faculty under discipline a process, and the right to grieve the decision in multiple settings. 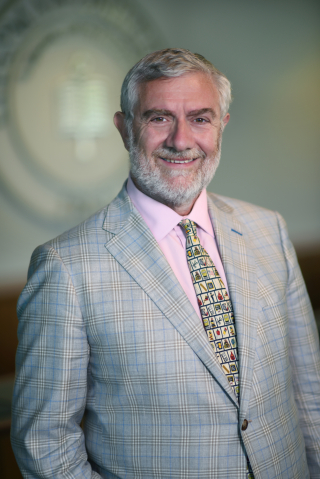 I do not know anything about President Struppa (pictured), but if this statement is representative of his qualities, he is a very fine university president.  I do have some concerns about wearing such a busy tie with a plaid sports jacket, but I would not question his leadership on that basis.

Happily, Chapman University and Professor Eastman were able to come to an agreement.  He voluntarily resigned, and neither party will pursue legal action against the other.  Some may think that Professor Eastman was strong-armed into forfeiting his position and some part of his academic freedom and freedom of expression.  I choose to see this episode as one in which contract law and contractual negotiation play a starring role and put in a strong showing.