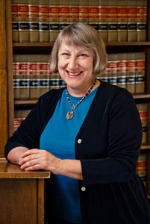 Teaching Assistants is an occasional column in which we spotlight scholarship that is especially helpful to teaching first-year courses.  Today's column also pairs nicely with our series of posts on introducing critical perspectives, including feminist approaches to contracts law, into the first-year contracts course.  The posts in that series are linked to at the bottom of this final post in that series.

It has been ten years since the publication of the article under consideration today, Debora Threedy, Dancing Around Gender: Lessons from Arthur Murray on Gender and Contracts, but it remains timely.  The Article begins with a helpful introduction, making out the case for why gender can provide a perspective on contracts law that can be just as helpful in explaining particular cases or doctrines as, for example, the economics and law perspective provides.  Professor Threedy (pictured) then looks at the "Arthur Murray" cases.  There follows an eye-popping footnote listing over twenty cases that all involve dance students trying to avoid enforcement of long-term contracts for dance lessons.  The cases identify a systemic problem of the dance schools preying upon single people looking for a social outlet.

According to Threedy, the cases illustrate a dilemma that members of subordinated social groups such as women and minorities face.  In order to escape the real-world consequences of gender subordination, the plaintiffs have to rely on affirmative defenses, each of which involves a concession: the women need special protection because they lack bargaining skill or bargaining power.  In order to reverse the economic effects of gendered subordination, these women need to persuade the court that they are, in some legally cognizable way, impaired or disadvantaged.

The cases partake of a canonical narrative, one in which a vulnerable, elderly widow or spinster is "swept off her feet" by a dashing young dance instructor.  Although some of the plaintiffs are men, the language of the cases with female plaintiffs is striking.  Courts deprive them of agency and highlight their victim status by referring to them in the passive voice.  The Article quotes from the cases at length to show the ways in which the courts seem to delight in detailing the plaintiffs' legal ineptitude and social desperation.

However, the canonical narrative might not fit the facts that well in these cases.  One plaintiff spent over $200,000 in today's dollars on dance lessons.  She was a women of means.  Threedy suggests that she was paying for male companionship just as men pay for female companionship.  Perhaps legal doctrines that reduce such sexually or socially aggressive women to the status of victimhood are not really about protecting the vulnerable.  Perhaps the cases serve to remind women of their appointed place in the social/legal hierarchy . That said, despite their sophistication, these women were inexperienced market players, and the behavior of the dance studios still conforms to a familiar narrative of commercial predators.  Threedy does not disagree with the outcome of the cases in which the courts granted rescission.

The way beyond the canonical narratives and out of the dilemma begins with thinking about assent in terms of "expressive choice" rather than "rational choice."  If we focus on what it means to give meaningful assent, we need not relegate subordinated groups to the humiliating categories offered under affirmative defenses. Rather, we can look to what motivated the choice, considering factors other than those typically identified in rational choice analysis.  However, expressive choice is only the first step in the inquiry.  Threedy proposes additional factors, including the reasonableness of the parties and their good faith.

The Article is a symposium contribution, and so it makes some moves that it cannot fully develop.  The expressive choice theory is not fleshed out in enough detail to satisfy my curiosity about the notion.  I see value in the idea that can be more thoroughly realized in connection with consumer contracts where rational choice analysis fails to provide, in my view, a satisfying theory of meaningful consent.  Our own Nancy Kim has explored this topic in Consentability.  The Article also asserts a connection between expressive choice and promissory estoppel that I don't follow.

I nonetheless find great value in Threedy's discussion of the dilemma that members of subordinated social groups face when they rely on affirmative defenses to try to avoid contractual obligations.  The dance studio cases are fun to teach in part because the courts exploit the canonical narrative of the easy mark to great comic effect.   Threedy gives us reason to resist the temptation to blame the victims.  Every victim of a scam looks and feels like a fool, but the scams work by taking advantage of the angels of our better nature -- our willingness to believe in others' good faith, our optimism for ourselves and others, and our sociability, which may also entail a bit of vanity, susceptibility to flattery, and willingness to take risks.  In the right circumstances, we can all be easy marks, and we need to develop non-patronizing ways for the law to protect us from the harshest consequences of ordinary human frailties.

As Threedy observes, the tension between freedom of contract and  paternalism may be unavoidable.  As Threedy also notes, we don't have to simply acquiesce in the paternalism long baked into the common law.  The flood of cases against Arthur Murray abated once legislatures intervened with both general consumer protection measures and targeted measures prohibiting the long-term contracts that dance studios (and others) used to take advantage of unwary consumers.

Until then, an outro via David Bowie

I co-Chaired the Conference (Contract in Context) with Blake Morant at Wake Forest in 2010. Debora's presentation was very impactful and included excepts from black & white (silent) movies showing 'coy' young gentlemen 'preying' on elderly 'feeble' & 'gullible' rich women at a dancing parlor. Of course, the women were neither feeble or gullible; they new exactly what they were paying for!