Contracts Issues in The Queen's Gambit 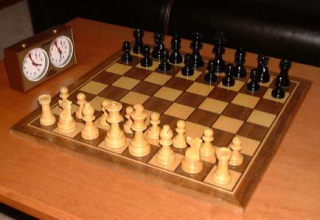 If you haven't yet seen The Queen's Gambit, I envy you.  You have something to look forward to.  It's a wonderful series.  Everything about it is wonderful.  Also wonderful: thanks to CUNY Law Professor Chaumtoli Huq and Shehran Uddin (@SUddin_10), I can share two contracts issues that arise during the series without terribly significant spoilers.

First, and here there is a bit of a spoiler . . .  the main character, Elizabeth (Beth) Harmon, is an orphan.  She is adopted by a couple, but the husband soon disappears, and Beth develops a complicated relationship with her adopted mother.  The mother dies while they are in Mexico for a chess tournament, and Beth calls her estranged, adopted father for help with funeral arrangements and changing her plane ticket.  The father, who can't deal with anything, offers a deal: "Get her up to Kentucky and bury her, and the house is yours. Just make the mortgage payments."  Beth performs; her father doesn't.  Some day, it is to be hoped, the people behind The Queen's Gambit will make a spin-off about the legal proceedings relating to the house that is as accurate and riveting a depiction of litigation as the series is in depicting chess tournaments.

The second contracts issue is less clear-cut.  Beth takes money from some conservative Christians who support her chess as part of their campaign against godless communism.  Ah, Cold War politics was so quaint.  In episode 7, the conservatives ask Beth to issue a statement denouncing communist atheism.  Beth says that she has no intention of saying "anything like that . . . because it's fucking nonsense."  The conservatives seem a bit surprised by Beth's agnosticism but what really concerns them is the breach of an implied contract.  They point out that they had supported Beth in the past and had already spent money for Beth's upcoming trip to Moscow for a tournament.  Beth responds by writing a check, reimbursing the conservative organization for its past contributions to her chess career.  So ends Beth's relationship with the conservatives.

In the series, the showdown with the conservatives propels the plot towards other characters who can help Beth, financially and spiritually, to compete in the chess tournament in Moscow.  But here again is an opportunity for a legal spin-off.  Suppose the conservatives sue Beth for breach.  Sure, she has returned the money they fronted her, but they could still claim that she was still unjustly enriched.  With their support, she traveled to tournaments and won prizes.  She did not share that money with the people who paid for her travel and accommodations.  Can they recover?  It will be hard for Beth to deny a contract when she repaid the money rather than treating the organization's prior support as gratuitous.  But what was their expectation?  Apparently, it was that Beth would issue a statement somehow establishing a connection between Christianity and her success at chess.  Is her failure to issue such a statement legally cognizable harm?

Can they claim that Beth was unjustly enriched when it was Beth's talent, rather than their money, that won the tournaments?  It seems that there is an argument that Beth benefitted, beyond the winnings at particular tournaments, from the travel to competitions that the conservatives facilitated.  She advanced her career and her ranking, which entitled her to play in more prestigious tournaments against other grandmasters. But they clearly did not do so in expectation of payment.  We would have to scour the communications between the parties to see whether there were terms and conditions or whether, and this seems unlikely given what we know of her, Beth somehow mislead the conservatives into thinking that she was more sympathetic to their perspective than she in fact was.  But that would take us beyond the realm of contracts, as a fraudulent inducement claim would result in rescission but no damages, given that Beth has already repaid the funds she received.

Here is the trailer for the show.  It's not a very good trailer; it makes the show seem much more conventional and melodramatic than it is.  There is melodrama, but the melodrama is spaced throughout a series that is well-paced, beautifully filmed and acted, unprecedentedly smart about the world of chess, and thoroughly engaging without being histrionic.