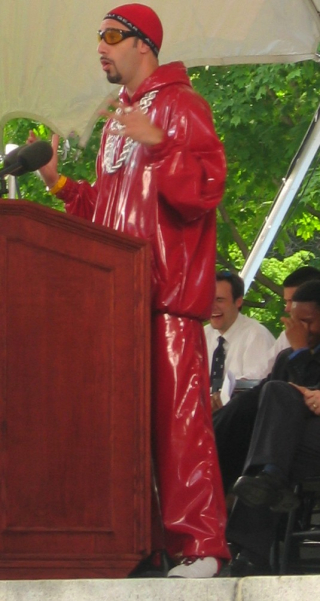 We're a bit late to this party, but since a second Borat film has just come out, it seems timely enough.  We covered the first Borat release obsessively here (and also here, here, here and here), since it actually generated a contract dispute that was resolved in Sacha Baron Cohen's favor.  For those interested in a more sober take on the affair, Russell Korobkin has that angle covered here.

Cohen (pictured as Ali G, left) is in trouble again for having broadcast his encounter with Alabama politician Roy Moore for a television show called "Who Is America."  Mr Cohen induced Mr. Moore into a purported demonstration of a device that a disguised Mr. Cohen touted as a pedophile detector.  To Mr. Moore's dismay, the device seemed to identify him as a pedophile.

Moore and his wife sued, alleging defamation per se, intentional infliction of emotional distress, and fraud.  The fraud claim is crucial.  Mr. Cohen was able to defend himself against false light claims in earlier cases based on releases that the plaintiffs had signed.  Mr. Moore signed a similar release, but despite Mr. Cohen's lawyers' insistence that the release clearly covered any allegations of fraud in the inducement, the District Court is allowing the case to proceed, perhaps because there is some question as to the identity of the parties to the release.  Cohen's joke of acting through alter egos may backfire if a court can't even tell whether he and his co-defendants are parties to a release.

But Moore's case (and Rudy Giuliani's inevitable case) seems distinguishable from the suit against the first Borat movie.  Moore and Giuliani are public figures, and First Amendment protections for ridiculing public figures are very generous.

Two cents on the movie.  Cohen's shtick is getting old and predictable.  His accents are terrible.  Also, I know it is supposed to be a low-budget movie made by a Kazakhstani agency, but the production values are ridiculously poor.  The entire film is in terrible taste, but every once in a while, it's really, really funny.  Maria Bakalova is the breakout star of the movie.  She manages to induce suspension of disbelief when such suspension no longer seems possible.

Mr. Cohen is also being sued by the estate of a Holocaust survivor, Judith Dim Evans, who appeared in a completely gratuitous scene.  The scene wasn't funny, even by the Cohen standard, under which cringe-inducing awkwardness is supposed to be funny, and it didn't advance the plot.  Still, the suit is confusing, Ms. Evans appeared as an embodiment of empathy and humanitas, ignoring Mr. Cohen's preposterous anti-Semitic costume and literally embracing him.  Yes, the film invites us to laugh at anti-Semitism and Holocaust denial, but haven't we been doing that at least since The Producers?  I'm not sure that being surprised that one has been used as a hallmark of Jewish menschlichkeit in a film that satirizes racial and religious bigotry provides the basis for a cause of action.