Hey, Won't You Play, Another Somebody Violated Some White House NDA Song? 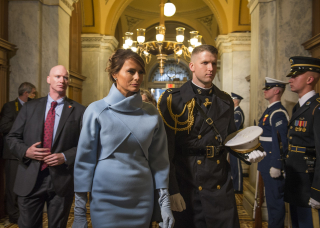 The Trump Administration is once again suing to enforce one of its non-disclosure agreements (NDAs) with one of its former employees.  In this case, the defendant is the ex-BFF of Melania Trump (pictured), Stephanie Winston Wolkoff, author of Melania and Me: The Rise and Fall of My Friendship with the First Lady.  That book is no-doubt a White-House memoire all that will enjoy lasting fame alongside those of George F. Kennan, Robert McNamara, and Henry Kissinger.  Among its substantive revelations is the bombshell that Melania Trump really doesn't care what people think of her.  Who would have guessed that?

According to the complaint, Ms. Wolkoff was volunteered to serve as the First Lady's advisor and signed a "Gratuitous Services Agreement" in which she promised to maintain strict confidentiality with respect to all "nonpublic, privileged or confidential information."  Her official duties involves advising the First Lady on speeches, appearances and policies.  Her unofficial duties apparently involved taping her private conversations with the First Lady, which is, you know, just what good friends do.  According to the government, Ms. Wolkoff's non-disclosure obligations continued after she left her volunteer position and had no end date.

As with the Mary Trump book and the John Bolton book, and the Stormy Daniels case (not to mention the Omarosa case), this suit comes too late to prevent the harm that an NDA is supposed to prevent.  The book has been published and became a New York Times #1 bestseller; the recordings of Ms. Wolkoff's conversations with the First Lady have gone viral.  The purpose of the suit (we imagine) is not to prevent disclosures but to disgorge profits made in violation of the NDA.  If the purpose of such suits is to deter future violations, the strategy seems to be failing.  So, perhaps the motivation is pure cussedness.  A fine use of tax dollars and the resources of the federal government.

And it may not work.  According to this article on Politico, in addition to wasting government resources, the case may be frivolous.  The article cites Brad Moss, a national security attorney, as follows: "The case law has been expressly clear for decades that former officials cannot be contractually censored for anything other than classified information.  .  . ."  The complaint identifies no classified information disclosed in Ms. Wolkoff's book.  Indeed, the case may in the end reveal that the White House's NDA's are overbroad and unenforceable.

An agent has a duty of loyalty to the principal, which in this case is the United States. Information entrusted to the agent by the principal (via the agent’s supervisors) cannot be used for the agent’s personal profit without the principal’s permission. That's about as clear a legal rule as there is, and that's the basis of count II. The first amendment bars restraining her from speaking, but it does not bar restitution for unjust enrichment by the equivalent of theft.
.
The contract simply adds another wrinkle. The contract is with the U.S., not with Donald or Melania, whose only remedies (which they're not pursuing) are for invasion of their personal privacy. I suspect the contract is pleaded as a litigation strategy simply because it makes it easy to introduce the fact that she was well aware that she wasn't supposed to make this public.

The government very often uses contractual NDAs s to prevent parties from releasing information that is not classified:

I doubt that there's any first amendment right to sell the bid award criteria the government entrusted to you to one of the prospective bidders.

I do not read the statute to which you cite as being remotely applicable. I'm not sure how we draw the line between disclosure of confidential commercial information for private gain, which would clearly be a form of corruption, and publishing confidential information (also for personal gain in this case) in the interests of providing insights into the conduct of public affairs.

Frankly, I think this book has pretty close to no value, both because it is gossip told by an unreliable narrator who, even in her own self-serving account comes off as malicious, disloyal, petty, and superficial, and because its target audience will only have their opinions of the First Lady confirmed. Anybody shocked by its revelations either has not been awake for the past four years or will reject them as malicious slander.

Still, sunlight is a great disinfectant. We might even consider injecting it sub-cutaneously as a COVID treatment. I would be wary of reading statutes such as the one you cite, which clearly has a commercial context, as applying to insider narratives about time served in public institutions. NDAs should not shield public officials from criticism by those who have seen behind the curtain.

Sorry, I didn’t mean to suggest that the statute applied, merely that the claim of a first amendment right to profit off of confidential government information is false. The point is not that the release of information caused any actual harm—the difficulty of proving that is why disgorgement is the usual remedy. We measure it by the bad actor’s gain, not the victim’s loss.

As to whether people working for Schumer or Pelosi should be able to secretly record their conversations and sell them to Trump, or vice-versa, that’s a policy question. That might be a good thing. But remember that sunlight doesn’t kill roaches, it just makes them conceal themselves better.

Always enjoy these exchanges with you!

I enjoy them too! I think the people who publish these books know that disgorgement is a possibility. They are willing to take that risk because: 1) they are vain; 2) they think they are providing a public service; 3) it is cathartic to commit one's experiences to paper and share them with the world; and 4) they expect consequential profits that will not be disgorged.

My understanding is that some states permit recording of private conversations and others don't. Personally, I find the practice reprehensible, but I don't know how I feel about making it illegal.

If someone were to record conversations with [pick your least-favorite Democratic leader], I suspect that no NDA would stand in the way of its publication. I have no doubt that Fox News, Breitbart, Sinclair, the RNC, and the Trump Administration would have absolutely no qualms about prominently featuring such material in their programming, press releases and campaign materials.

Given all that, I suspect that no such material exists. Why is it that so many people who were part of this administration are so eager to air its dirty laundry while people on the other side are not? My theory is that the current administration has not in fact been able to recruit "the best people" and that its "extreme vetting" process did not extend even to the White House's inner circle.