Part III: The Dissents’ Response to the Majority’s Conceptual Claim About Discrimination Based on Sexual Orientation or Transgender Status, and the Majority’s Reply.

Unsurprisingly, the defendant-employers in Bostock and both dissents challenge the majority’s conceptual claim that discrimination based on a person being homosexual or transgender is always based on sex as well.  Justice Kavanaugh says very little on this point, so between the two dissents, I focus here on Justice Alito’s.  Justice Alito (right) 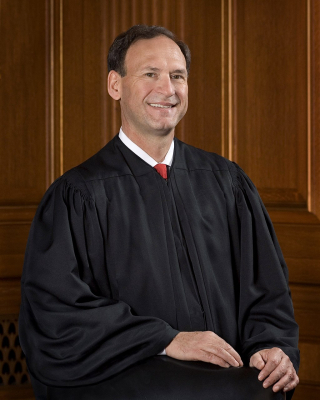 offers a number of arguments that sexual orientation and transgender status discrimination do not inherently involve sex discrimination, nearly all of which I find completely unpersuasive (see, e.g., Alito Dis. at 9-10).  But one argument has some merit, and it is the same argument offered by the defendants and implied by Justice Kavanaugh.  Alito and the defendants assert that the majority’s key example that I discussed in yesterday’s post is invalid.  Recall that the majority stated that there is only one difference between the two employees in the hypo: sex.  The majority further stated that if we change only the sex of the employee from male to female, the employee would not be terminated, showing that sex is the but-for cause of the dismissal.

The majority replies principally with a reductio ad absurdum argument—an argument that the premises of one’s opponents lead to an absurd conclusion that all would reject.  The structure of the argument is as follows: The reasoning of the defendants and Justice Alito necessarily results in sex not being a but-for cause when an employer makes adverse employment decisions based on traditional gender roles.  But since no one believes that to be the case, no one could accept the argument of the defendants and Justice Alito that sex is not a but-for cause when an employer makes an adverse employment decision based on sexual orientation or transgender status.  Let me explain.

Note that the majority’s analysis here is grounded, in part, on the fact that Title VII is concerned with discrimination against individual men and women on the basis of sex.  Even if an employer treats men as a class the same as women as a class, the employer can still be unlawfully discriminating on the basis of sex.  Maj. Op. at 7-8, 11-12.  To illustrate, “an employer who fires a woman, Hannah, be­cause she is insufficiently feminine and also fires a man, Bob, for being insufficiently masculine may treat men and women as groups more or less equally.  But in both cases the employer fires an individual in part because of sex.  In­stead of avoiding Title VII exposure, this employer doubles it.”  Maj. Op. at 9.  That helps to explain why it is no defense to liability for sex discrimination that an employer treats homosexual (or transgender) men and women in exactly the same manner.  Maj. Op. at 11-12.  An employer that fires both men and women due to sexual orientation (or transgender status) has doubled its liability rather than eliminated it.  Maj. Op. at 12.