Unconstitutional Contractual Relations? The Emoluments Clause and In re Trump 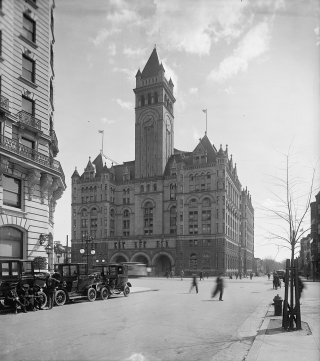 Pictured at left is the building now known as the Trump International Hotel in Washington, DC, but this photo is from 1911, back when the building housed the post office.  Contractual relations relating to this building are at the heart of  In re Trump, in which the Fourth Circuit, sitting en banc this week denied the President's petition for a writ of mandamus ordering the district court to permit an interlocutory appeal from its refusal to dismiss the case.

President Trump, acting through companies he owns or controls, has violated both the Foreign Emoluments Clause and the Domestic Emoluments Clause by receiving millions of dollars in payments, benefits, and other valuable consideration from foreign governments and persons acting on their behalf, as well as federal agencies and state governments. His repeated, ongoing violations include remuneration derived from: (a) leases of Trump properties held by foreign-government-owned entities; (b) purchase and ownership of condominiums in Trump properties by foreign governments or foreign-government-controlled entities; (c) other property interests or business dealings tied to foreign governments; (d) hotel accommodations, restaurant purchases, the use of venues for events, and purchases of other services and goods by foreign governments and diplomats at hotels, restaurants, and other domestic and international properties owned, operated, or licensed by President Trump; (e) continuation of the General Services Administration lease for President Trump’s Washington, D.C. hotel despite his breach of the lease’s terms, and potential provision of federal tax credits in connection with the same property; and (f) payments from foreign-government-owned broadcasters related to rebroadcasts and foreign versions of the television program “The Apprentice” and its spinoffs. Moreover, President Trump, by asserting that he will maintain the interests at issue, is poised to engage in similar constitutional violations for the duration of his presidency.

The President challenged that suit on various grounds, and the District Court granted the President's motion to dismiss (on standing grounds) as to properties other than the Trump International Hotel in Washington, DC.   The President sought certification for an interlocutory appeal of the district court's decision, which the court denied.  The President than petitioned the Fourth Circuit for a writ of mandamus that would force the district court to allow the case to proceed.  A Fourth Circuit panel not only granted the mandamus petition but ordered the suit dismissed for lack of standing.

This week's en banc opinion reversed the panel, stressing the extraordinary nature of mandamus relief as a mechanism for challenging a decision within the discretion of a district court.  The majority opinion clearly will not be the last word.  It merely states that, even if the district court's decision to deny the President an interlocutory appeal was clearly erroneous, that error would not justify the grant of a writ of mandamus.  The standard is abuse of discretion, and the district court, even if its decision was incorrect, did not abuse its discretion. The majority acknowledged that the District and Maryland raise novel claims as to standing and as to the ability of courts to imply an injunctive remedy without statutory authorization.  However, the majority did not view those claims as so tenuous as to justify summary dismissal.

But here on the ContractsProf Blog, we are more interested in the District and Maryland's  substantive claims, and it is to be hoped that the district court at least will eventually address the merits of those claims.  It would be nice to know if the Emoluments Clauses are an actual limit on a President's ability to enter into contractual relations with foreign governments or with U.S. governmental agencies.  This issue becomes more acute during the current economic crisis.  The Trump Organization has sought relief from the Trump Administration on its $3 million lease for the Trump International Hotel.  I understand that there are issues of standing and the enforceability of the Emoluments Clause through the courts, but it is hard to read my preceding sentence and not think o tempora o mores!

Unfortunately, it seems that the barriers to getting a judicial answer to the questions at the heart of this case may be insuperable.  In any case, with the en banc court sending the case back to the district court, more than three years into the litigation, we are still pretty much at square one.  The answer may be that the plaintiffs don't have standing or courts cannot invent a remedy where the Constitution does not provide one.  Or the case might become moot because we have a new President before the case can be decided.

Interesting. To violate the foreign emoluments clause, you must (a) hold an office of profit or trust under the United States, (b) receive an emolument, from (c) a foreign state. Assuming (a) and (c)—though I understand (a) is debatable from a Con Law perspective—is money received in exchange for selling something an “emolument”?

If the word simply means “something of value,” then renting a hotel room would seem to be an exchange of emoluments; I get an emolument in the form of a room, the hotel gets one in the form of cash. If that’s so, anything purchased or sold by a President (or any other federal employee) involves an emolument. If the President were to travel to China, for example, and stay at the Peace Hotel in Shanghai (owned by the Chinese government), he would be getting an emolument even if he paid full retail price for the room, wouldn’t he?

Suppose I, a federal employee, list my car for sale on Craigslist for $10,000. The buyer, an attaché from the Uruguayan embassy, offers me $9,000 and we agree to a sale at $9,500. I do not seek approval from Congress. Have I violated the emoluments clause? Or suppose I have an eBay store where I sell classic soccer cards. The Namibian Army chief of staff, who is a huge soccer fan, buys one of my cards at my preset “Buy it Now” price. Violation?

Obviously if the transaction involves an attempt to gain influence (e.g., paying huge speaking fees to the husband of an influential Cabinet secretary or a beloved First Daughter) there are issues of bribery and unlawful gratuities. But those are separate from the emoluments issue, aren’t they?

Great to see you in this space, Frank! I think you raise a number of great issues that I hope some court gets to address on the merits at some point. I learned a lot about the original meaning of “emoluments” from John Mikhail’s work, (https://papers.ssrn.com/sol3/papers.cfm?abstract_id=3419223), and he makes the very strong case that the term is broad, but the Foreign Emoluments Clause forbids officers of the United States (to simplify matters) only from receiving emoluments from foreign states (or rulers).

Your other examples involve transactions with foreign employees acting in their personal capacities. I do not think the Foreign Emoluments Clause covers transactions with an employee of a foreign government; it only mentions taking emoluments from “any King, Prince, or foreign State.”