Sexism in Soccer or No Retroactive Bargaining?

In the movie RBG, Justice Ginsburg noted, "I ask no favor for my sex. All I ask from my brethren is that they take their feet off our necks."  For those of us who follow women’s opportunities in the workplace and beyond, it probably struck us as shocking when a judge famously dismissed the U.S. women’s soccer teams’ equal pay claim last week.

At first blush, the opinion seems very gender biased.  After all, female soccer players are said to be better than their male counterparts.  For example, they won the World Cup in 2019 whereas the men’s team did not even qualify in 2018 and has not placed in the top three since 1930 when it won bronze.  (The complaint sets forth many other wins by the women’s national soccer team not achieve by the men’s team.) 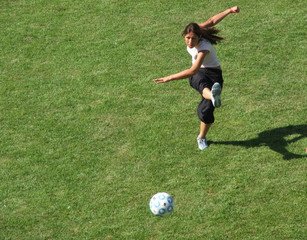 According to a Washington Post article, which cited copies of both agreements, female U.S. soccer players can sign contracts that provide an annual salary of $100,000 and additional bonuses for wins and ties.  The men do not get annual salaries, but they get larger bonuses per game — including a guarantee of $5,000 even if they lose (free version here). Under these structures, a female player who played (and won) 20 exhibition matches would receive just 89% of what a male player would get under the exact same circumstances.  If both players lost all 20 matches instead, the payment would be the same for both groups: $100,000.  However, FIFA awarded $30 million in total prize money for the 2019 World Cup, with the champion — the U.S. — netting $4 million. That's 10.5% of what the men's World Cup champions received.

Also upsetting for many was how U.S. Soccer defended itself earlier in the equal pay lawsuit filed by the U.S. Women’s National Team (USWNT), claiming that the World Cup champions’ male counterparts have “more responsibility” and their job “requires a higher level of skill.”

Title VII prohibits employers from discriminating against any employee “because of sex.”  42 U.S.C. § 2000e-2(a)(1).  This of course also prohibits paying females less than men for the same work.  However, J. Klausner’s ruling pointed out how the men’s and women’s contracts were structured differently before agreed upon in collective bargaining.  This history, wrote J. Klausner,

demonstrates that the WNT [Women’s National Team] rejected an offer to be paid under the same pay-to-play structure as the MNT [Men’s National Team], and that the WNT was willing to forgo higher bonuses for other benefits, such as greater base compensation and the guarantee of a higher number of contracted players.  Accordingly, Plaintiffs cannot now retroactively deem their CBA [Collective Bargaining Agreement] worse than the MNT CBA by reference to what they would have made had they been paid under the MNT’s pay-to-play structure when they themselves rejected such as structure ….  One of the defining features of the WNT CBA is its guarantee that players will be compensated regardless of whether they play a match or not.  This stands in start contrast to the MNT CBA, under which players are only compensated if they are called into camp to play and then participate in a match.

In other words, the CBA was, according to the court, a contract that could not be changed after the fact when it turned out to be less lucrative overall than that for the men’s team.  In fact, J. Klausner went further and found that “the WNT has been paid more on both a cumulative and an average per-game basis than the MNT over the class period.”  Thus, he held, the WNT did not even demonstrate a triable issue that their players are paid less than men….  That seems to be debatable, but I will not do so here for space reasons.

I’m sure there are also more contractual details at issue than what I have outlined here.  It is difficult to discern exactly what is going on here.  Is this truly a matter not of gender differences, but “only” of how the initial CBAs were negotiated and drafted, or are there truly gender issues at play here, so to speak?  Comment below!

The spokesperson for the WNT noted that an appeal will be filed and, “We have learned that there are tremendous obstacles to change.  We know that it takes bravery and courage and perseverance to stand up for them.”