As reported on The Hill and in several other national and international news outlets, tiny Montana energy company Whitefish Energy – located in Interior Secretary Ryan Zinke’s very small hometown – stands to profit greatly from its contract with the Puerto Rico Electric Power Authority. That’s fine, of course. However, highly questionable issues about the contract have surfaced recently.   For example, Whitefish very famously prohibited various government bodies from “audit[ing] or review[ing] the cost and profit elements of the labor rates specified herein.” 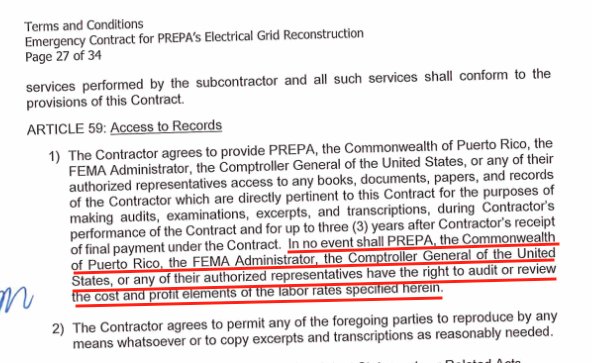 What were those? The Washington Post reports that under the contract, “the hourly rate was set at $330 for a site supervisor, and at $227.88 for a ‘journeyman lineman.’ The cost for subcontractors, which make up the bulk of Whitefish’s workforce, is $462 per hour for a supervisor and $319.04 for a lineman. Whitefish also charges nightly accommodation fees of $332 per worker and almost $80 per day for food.” Another news source notes that “[t]he lowest-paid workers, according to the contract, are making $140.26 an hour. By comparison, the minimum wage in Puerto Rico is $7.25 an hour … [T]he average salary for a journeyman electrical lineman is $39.03 per hour in the continental U.S. However, a journeyman lineman on Whitefish Energy's Puerto Rico project will earn $277.88 per hour.”

Little wonder why the company did not want anyone to “audit or review” its labor rates. If it wasn’t for the apparent “old boy”/geographical connections that seemed to have led to this contract to have been executed in the first place, hopefully no Puerto Rican official would have accepted this contract in the form in which it was drafted.

But it doesn’t end there. When the San Juan mayor called for the deal to be “voided” and investigated, Whitefish representatives tweeted to her, “We’ve got 44 linemen rebuilding power lines in your city & 40 more men just arrived. Do you want us to send them back or keep working?”

To me, this entire contract to violate several established notions of contract law such as, perhaps, undue influence or duress (in relation to contract formation but perhaps also, if possible, to continued contractual performance), bad faith, perhaps even unconscionability, which is a alive and well in many American jurisdictions.

This could work as an interesting and certainly relevant issue-spotter for our contracts students. It also gives one a bad taste in the mouth for very obvious reasons. It will be interesting to see how this new instance of potentially favoring contractual parties for personal reasons will pan out.