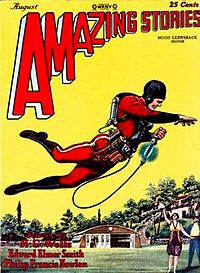 There's an interesting case out of the Eastern District of Pennsylvania, The Dille Family Trust v. The Nowlan Family Trust, Civil Action No. 15-6231, dealing with issues around the trademark BUCK ROGERS. But it also has a breach of contract angle that requires us to learn the history of Buck Rogers. So let's dive in!

Philip Nowlan wrote a story called Armageddon 2419 A.D. that appeared in August 1928, starring a character named Anthony Rogers. In 1929, Nowlan wrote a sequel to the story, also starring Rogers. Nowlan, identified as the "creator of . . . 'Buck' Rogers," entered into a contract in 1929 with a newspaper service owned by John F. Dille to syndicate the comic strip "Buck Rogers." This contractual relationship seemed to survive through the 1930s, until Nowlan died in 1940. Nowlan's widow, Theresa Nowlan, then sued the newspaper service alleging underpayment under the contracts. The parties settled in 1942, which is where the breach of contract claim in the current case arises from. The agreement provided that Theresa Nowlan and her "heirs, executors, or administrators" released all claims against the newspaper service related to Buck Rogers and also conveyed all intellectual property interest in Buck Rogers to Dille.