Pershing Square in downtown Los Angeles is an outdoor area that is regularly the home of free summer concerts and demonstrations of various kinds throughout the year. You would think you could snap as many photos as you wanted of events there since it is an outdoor, public area, right? 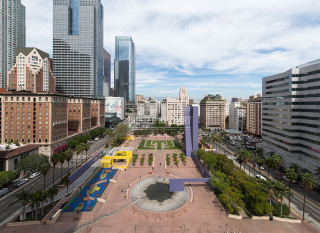 This past summer, the answer was no. A photojournalist wanted to take pictures of, among others, the B-52s. However, he was informed of a policy that had been set up with the performers per contractual agreement. The policy barred professional photography equipment, albeit not cell phone usage, from the square during concerts.

ACLU has complained to the Los Angeles City Attorney and the General Manager of the Department of Recreation and Parks, claiming that the city does not have a right to contract away the general public’s First Amendment rights because some performers want it that way.

How do you see contractual rights intersecting with the First Amendment in the government contracting context? Comment below!