Our friends at the Uniform Law Commission (better known by some as the National Conference of Commissioners on Uniform State Laws) sent out a press release today highlighting another adoption of revisions to the Uniform Commercial Code:

May 8, 2017 — Missouri has become the latest state to enact important provisions of the Uniform Commercial Code (UCC).  HB 34, which included the most recent versions of UCC Article 1 and UCC Article 7, was sponsored by Rep. Dean Plocher and signed into law today by Missouri Governor Eric Greitens.  *  *  * 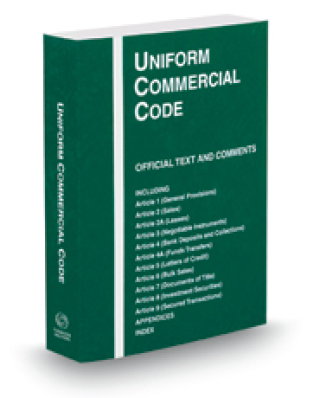 The UCC is a comprehensive set of laws governing all commercial transactions between U.S. states and territories.  It is not a federal law, but a state law.  The UCC is organized into nine substantive articles, each article governing a separate area of the law.

UCC Article 1 provides definitions and general provisions that apply to transactions covered by other articles of the UCC.  Article 1 impacts every transaction governed by the UCC, including any sale of goods, any letter of credit, any warehouse receipt, or any transfer of an investment security.  It is important to have Article 1 up-to-date and consistent with the rest of the UCC.

The Uniform Commercial Code is a joint project of the Uniform Law Commission and the American Law Institute (ALI).  Revisions to various UCC Articles are part of an ongoing undertaking by the ULC and the ALI to modernize the UCC, originally promulgated in 1951 and enacted in every state, and keep it responsive to contemporary commercial realities.

Further information on the Uniform Commercial Code can be found at the ULC’s website at www.uniformlaws.org.

The Uniform Law Commission, now in its 126th year, provides states with non-partisan, well-conceived and well-drafted legislation that brings clarity and stability to critical areas of state statutory law.  The organization comprises more than 300 lawyers, judges, and law professors, appointed by the states as well as the District of Columbia, Puerto Rico, and the U.S. Virgin Islands, to research, draft and promote enactment of uniform state laws in areas of state law where uniformity is desirable and practical.  Since its inception in 1892, the group has promulgated more than 200 acts, among them such bulwarks of state statutory law as the Uniform Commercial Code, the Uniform Probate Code, and the Uniform Partnership Act.