The New York Times reports here (paid access) on the increasing use of so-called “rent-to-own” housing contracts. Under these contracts, companies from big Wall Street giants to a slew of small landlords hoping to strike it rich lend or, should I say, purport to sell homes to tenants who contractually commit to make all repairs on the homes no matter how major or minor (yes, you read that right: all repairs… and it gets more extreme than that, read on!). Typically, tenants under such contracts are not told what repairs are needed, yet face a contractual deadline for making sure that the houses in question are brought up to local code. Unlike most typical home purchases, rent-to-own contracts do not require the tenant/buyer to obtain an independent home inspection. 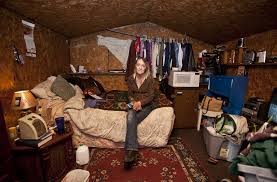 We probably all know how many things can go wrong with older homes, even newer ones. Examples of how bad things can go in this context thus abound. One tenant moved into a home not having been told that it had several unresolved building code violations and had to remain vacant by city order. Another moved into a home that had no heat, no water, and major problems with its sewage system that led to nearly $10,000 in repairs (many of these homes have been purchased by the lender for less than $10,000 and are not worth very much more than that, if any). A third example describes a woman moving into a home with her three children and partner in Michigan, living in the house during cold winter with the only heat sources being one electric heater and a wood-burning stove in the kitchen, only to be evicted and charged $3,100 in overdue rent after she stopped paying rent because of the heat issue. People who accept these kinds of contracts often do not qualify for mortgages. Banks have virtually stopped making mortgages on homes worth less than $100,000, which leaves millions of people with few options for - now or one day - owning their own homes.

One company that rents homes on a rent-to-own basis does so “as is,” calling the contracts “hybrid leases” that allow people to build up “implied equity.” If tenants are evicted during the contract (typically of a seven-year-duration), they get no credit for money spent on repairs or renovations. Neither do they receive any equity unless they actually end up buying the home at the end of the contract term. At that point, they still need financing for the home which, as mentioned, many people just cannot obtain.

A number of legal questions arise in this context, among them several contractual ones such as the role of caveat emptor vs. the violation of a possible duty to disclose. If the landlords know of the problems from which many of these houses suffer, should they disclose this knowledge? On the other than, shouldn’t these potential (long-term) buyers be presumed to have at least enough savvyness to not promise to bring a home that they do not own outright up to Code by a certain deadline? Then again, are landlords fraudulent in their dealings with these folks when the landlords require such potentially extensive repairs when, as the owners of the homes, they presumably if not actually have actual knowledge of the problems from which these houses suffer? What about the statement that renters get “implied equity?” What in the world does that mean, if anything? Do low-income folks that may never have been homeowners truly understand what it means to bring a home “up to Code” and buying “as is?” Does it matter? And what about the doctrine of unconscionability, which is alive and well in some states such as California? If nothing else, this case seems to smack of both procedural and substantive issues.

In some states, landlords are required to keep homes and apartments in habitable condition. But rent-to-own contracts have, for good reason, been said to reside in a gray area of the law: are they rental contracts? - Or purchase contracts? Or something else?

Further, rent-to-own contracts may, to some extent, resemble contracts for deeds. However, the latter are subject to basic consumer-lending regulations such as the Federal Truth in Lending Act.

The housing market again seems to host highly questionable practices. This story almost reads as a contract or property law issue-spotting exam. Meanwhile, housing sharks seem to be swimming relatively freely in some areas of the nation.