In Orange County, California, jails, the average phone call costs just that.  In return for providing phone service in a county’s jail system, a telecommunications company typically guarantees the county a multi-million dollar “commission” as well as a percentage of the revenue.  For example, Alabama company Global Tel-Link guarantees a payment of $15 million or two-thirds of phone revenue, whichever is greater, to Los Angeles County.  To be able to pay such a high price, the phone companies of course pass the cost on to the end clients; the inmates in at least Southern California counties. 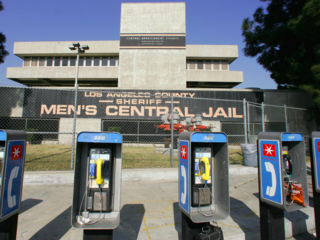 The inmates and their families have had enough.  They filed suit recently against Los Angeles and nearby counties alleging that the fee for inmate telephone calls are “grossly unfair and excessive” and amount to an illegal moneymaking scheme for local governments.

Before you ask yourself who is calling the kettle black, as I must admit I did when I first learned of this story, think of this: criminal recidivism is greatly reduced by family communication.  The Federal Communications Commission last month capped local call rates and trimmed the cap on interstate long-distance calls for this and other reasons.  Mothers with husbands in jail have paid several thousand dollars to telecommunications companies so that their children can talk to their fathers, undoubtedly a benefit to not only the families, but also society in the long run.

Of course, the inmates have few alternatives as cell phones are very typically not allowed in jail.

It continually amazes me how much Americans are willing or have to pay for phone service, Internet service, and cable TV service.  In the case of inmates, of course, they have little choice.  To avoid paying large monthly fees for cell phone service, I have kept my “dumb phone,” but instead find myself annoyed at still, in 2015, not being able to get more selective cable TV for only those stations I truly watch (the news, if you can call it that these days).  Monopolies or not: communications companies still typically have the upper hand in contractual bargaining situations.

Telephone fees assessed inmates are just one example of a myriad of charges assessed to criminal defendants that are used to help fund declining state and local budgets. Often the fees go beyond simple reimbursement of expenses and are unrelated to the underlying offenses. In the case of telephone charges (as Congress members described in an October 20, 2015 letter to the F.C.C.),“ up to 60 percent of what prisoners’ families pay to receive phone calls from their incarcerated loved ones has nothing to do with the cost of the phone services provided.”

Fees assessed to inmates are just one component of the growing problem of criminal justice debt that currently affects millions of individuals. Criminal justice debt includes fees, fines, and restitution. Monetary charges can be imposed at any stage criminal proceedings: pre-conviction, sentencing, incarceration, or probation.

Unfortunately, the use of the charges can be abusive. The Department of Justice’s scathing report on the Ferguson Police Department describes a system where the city, the police, and courts were more concerned with collection of revenue than public safety. Moreover, the abuses relating to criminal justice debt described in the report are not limited to Ferguson.