I have been looking forward to the resumption of my posts on ContractsProf blog, but sometimes events overtake us. It is with the greatest regret that I report that our colleague Louis F. Del Duca, Professor Emeritus at Penn State Law, died suddenly on 30 November 2015. An announcement from his law school is available here.

Lou was one of my co-authors on Global Issues in Contract Law (“GICL”), and a beloved friend and colleague for all of us. He was the longest-serving faculty member in the history of Penn State – Dickinson Law, and an internationally recognized scholar in commercial and comparative law. His influence in the “internationalization” of American legal education was profound. His inspiration on the development of West Academic’s Global Issues series was palpable.

At the time of his passing, Lou, I and our coauthors were finishing up the preparation of the GICL second edition. We all feel fortunate to have had this one last interaction with Lou, and I look on GICL second as a small remembrance of our friend and colleague. Godspeed Lou! 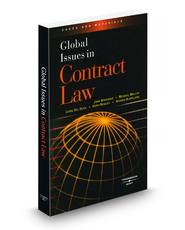