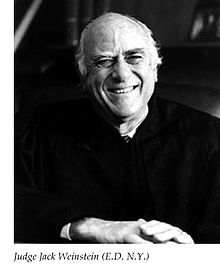 Plaintiff Adam Berkson,  alleges that the defendant, Gogo, misled him and a putative class of similarly situated consumers, who signed up for in-flight wifi service through Gogo's website. Plaintiffs allege that the website led them to believe that they were signing up for a one-month subscription.  Gogo claims that its site clearly provides for automatic renewal, as well as mandatory arbitration and choice of venue.  Plaintiffs allege breach of the implied covenant of good faith and fair dealing, unjust enrichment, and violations of consumer protection statutes.  Gogo responded with a motion to transfer venue, compel arbitration and dismiss for lack of standing.  As the first two parts of Gogo's motion related to its terms of use, Judge Weinstein had to address plaintiffs' claim that they were not bound by hidden terms.

In an 83-page memorandum and order of the case, available here, Judge Weinstein denied all three parts of Gogo's motion.  Judge Weinstein identifies three policy questions raised by the suit.  We are most interested in the first:

[H]ow should courts deal with hybrid versions of “browsewrap” and “clickwrap” electronic contracts of adhesion (referred to in this memorandum as “sign-in-wraps”) that do not provide internet users with a compelling reason to examine terms favoring defendants?

We note in passing that in defining his terms and throughout the opinion, Judge Weinstein relies on Nancy Kim's book, Wrap Contracts.  He also takes note of other excellent work by scholars whose work has been featured on this blog, such as Oren Bar-Gill, Woodrow Hartzog Juliet Moringiello and Tess Wilkinson-Ryan, among others.

Judge Weinstein concluded that, in the circumstances present in the case, "the average internet user would not have been informed. . . that he was binding himself to a sign-in-wrap" and that the wrap contract thus "does not support the venue and arbitration clauses relied upon by defendants."  The relevant facts are a bit different for the two named plaintiffs, but the basic gist is that they would have to click on the words "terms of use" in order to gain access to them, and they could agree to those terms of use without clicking on the words.  In addition, Gogo's arbitration and venue provisions were not added until after plaintiffs signed up for the service.

After a truly impressive survey of the caselaw and the scholarly literature, Judge Weinstein emerges with some general principles:

Applying these principles, Judge Weinstein concludes that Gogo could not establish that the named plaintiffs knowingly bound themselves to Gogo's terms of use.  Along the way, Judge Weinstein notes that some of the wrap contract cases are not correctly decided and do not accurately apply precedent.  He also makes clear that the design and presentation of the contract matter in determining whether a consumer has had an opportunity to give meaningful consent to terms in a wrap contract.

A hearing on class standing is scheduled for July.  Stay tuned.