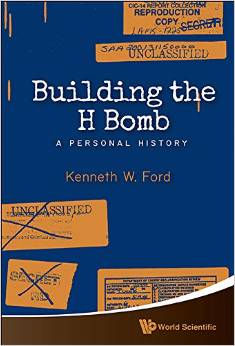 My friend Ken Ford is enjoying his fifteen minutes of fame, courtesy of the Department of Energy (D0E), which is displeased with his memoir, Building the H-Bomb: A Personal History.  According to this report in the New York Times, DoE officials told Dr. Ford to make cuts to his book that would have eliminated 10% of the text.  DoE personnel flagged 60 separate passages in the book for editing.

This demand (and the DoE made clear that it was making demands not requests) came as a surprise to Dr. Ford, who had submitted the book for DoE review expecting the process to be a mere formality.  In Dr. Ford's view, the book contains no secrets, as the information that he included in his book relating to the history of the hydrogen bomb either had been previously disclosed or was released to him through FOIA requests.  The DoE sees things differently, but the agency is unlikely to respond to the publication of Dr. Ford's book, in large part because any action it takes would only draw attention to the information whose disclosure it regards as improper.

The Times articles covers the story well and provides some examples of material that the DoE regards as classified but Dr. Ford regards as public.  We would like to focus on a couple of contractual issues.  First, the Times references Ken's alleged contractual obligation arising from a non-disclosure agreement he signed in the 50s.  Dr. Ford does not recall what that agreement said, but he provided this blog with a copy of a similar agreement dated from September 2014.  The DoE asked Dr. Ford to sign this new non-disclosure agreement  in connection with its review of his manuscript.   That document provides the government with multiple remedies should Dr. Ford reveal any classified information, including:

Given this non-disclosure agreement, one would expect that Dr. Ford's publisher would be reluctant to publish the book, fearing that it too might become a target of government scrutiny.  In order to protect his publisher against liability, Dr. Ford agreed to amend his publication agreement to expand the usual indemnification clause.  The additional language in the contract provides that Dr. Ford will indemnify his publisher "against any suit, demand, claim or recovery, finally sustained, by reason of . . . any material whose dissemination is judged by the United States Government to have violated the Author's obligations regarding the handling of sensitive information."

Dr. Ford provides an overview of the story that his book tells, as well as links to about a score of documents, eight of which are annotated with Dr. Ford's comments, on George Washington University's National Security Archives.

Listed below are links to weblogs that reference Physicist Publishes Autobiography, Defying the Department of Energy: A Contracts Take: