This is the eleventh in a series of posts that are part of a virtual symposium on the new book by Omri Ben-Shahar and Carl E. Schneider, More Than You Wanted to Know: The Failure of Mandated Disclosure.  Biographies for the second week's contributors can be found here.  The authors' introduction to the symposium can be found here. 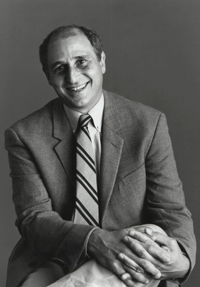 David C. Vladeck is a Professor of Law at Georgetown University Law Center, where he teaches federal courts, civil procedure, administrative law, and a seminar on First Amendment litigation. Professor Vladeck recently returned to the law school after serving for nearly four years as the Director of the Federal Trade Commission’s Bureau of Consumer Protection.

Living in a Post-Disclosure World?:  The Challenge of The Failure of Mandated Disclosure

The title of Omri Ben-Shahar and Carl Schneider’s new book, More Than You Wanted to Know:  The Failure of Mandated Disclosure, is perfectly apt; the book did tell me far more about the failings in mandated disclosures than I wanted to know.   But to be fair, I was warned.  The “disclosure” in the title put me on notice that I would learn “more than I wanted to know,” and the authors kept their promise, proving, perhaps in tension with their title, that disclosures sometimes work.

This is a book worth reading.  The authors ably stake out and defend their thesis.  They carefully, cogently, and at times, ardently make the argument that mandated disclosure regimes are destined to fail.   Too many disclosures lead to overload.  Too many disclosures are incomprehensible - written in leaden language, laden with disclaimers, and comprehensible only by people with multiple doctorate degrees.  But what really dooms disclosures is indifference – a curse for which there is no cure.   While improvements around the margins may be possible, the authors contend that engaging in the quixotic effort to fix unfixable mandated disclosure regimes is a fool’s errand.   Instead, we should move to better and more effective regulatory regimes in those instances where they are really needed.

Make no mistake; Omri and Carl are not corporatists who want to leverage corporate power over consumers.  Their intentions are pure and good.  They care deeply about promoting consumer welfare.  But, in their view, our current disclosure regime does the opposite:  It is a ruse that promises consumer protection but delivers nothing more than an illusion.       There is, of course, a great deal of truth in the authors’ critique of mandatory disclosure regimes.  Few, if anyone, will defend the status quo.   I certainly will not.  I share most, if not all, of the criticisms that the authors rightly train on mandatory disclosure regimes.   And I wholeheartedly endorse their view that disclosure and more disclosure, as a politically expedient compromise, often prevents needed regulation.

But I do not accept the pessimism that runs through the book.   Reading it, I was reminded of the quip about democracy –  which “ is the worst form of government, except for all those other forms that have been tried from time to time.”   In some respects, disclosure mandates are the worst form of consumer protection tools.  But for some things, disclosures serve important interests.   Disclosures cannot simply be abandoned; we need to preserve them where appropriate, we certainly need to figure out how to do them better, and we need to stop using disclosure regimes as a substitute for needed regulation.  For this reason, I’ll pick up where the book leaves off; that is, how to reform the process to move to less bad disclosure regimes.

I have three modest points:  In today’s post I will argue that there are disclosure regimes that work.  We should explore them to see why.   In my second post, I will argue that there are tools that can be used to address some of the flaws that Omri and Carl rightly identify and criticize.  They must be employed.  Finally, my tenure at the FTC taught me that mandatory disclosures are often an effective way to ensure accountability.  That virtue is worth exploiting. 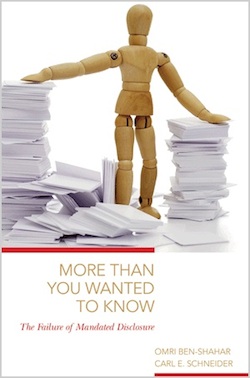 1.  Success stories:   There is no question some mandatory disclosure schemes work.  A number of health warnings have succeeded.   For instance, no one would seriously challenge the success of the Food Allergen Labeling and Consumer Protection Act of 2004 in substantially reducing life-threatening allergic reactions to foods.   Nor would one take issue with the success of poison-prevention programs that rely on Skull and Crossbones warnings.   Perhaps the most dramatic success story is the virtual elimination of Reye’s syndrome in children in the United States as a result of mandatory labeling of aspirin-containing products.   Reye’s syndrome is a rare and potentially fatal condition affecting children and adolescents.  The syndrome attacks the brain and liver, and about half of those afflicted die, with many more suffering severe and irreversible brain damage.  By the late 1970s, strong evidence emerged that there was an association between Reye’s syndrome, and children and teenagers taking aspirin-containing products to treat flu like symptoms and chicken pox.   I was a lawyer at Public Citizen Litigation Group when we brought suit to compel the FDA in 1986 to amend the labeling of all aspirin-containing products to warn parents of the association.  The litigation took a few years, but ultimately succeeded in forcing the FDA to put this warning on aspirin-containing products:  “Children and teenagers who have or are recovering from chicken pox or flu-like symptoms should not use this product.  When using this product, if changes in behavior with nausea and vomiting occur, consult a doctor because these symptoms could be an early sign of Reye’s syndrome, a rare but serious illness.”    The statistics are striking.   “In 1977, 454 cases of Reye’s syndrome were reported in the United States.  Of the 373 cases with follow-up, 42% of these patients died, and 11% survived with residual neurologic damage. Incidence was increased with viral epidemics, especially influenza B and varicella. Reye’s syndrome cases in the U.S. numbered 555 in 1980, but they have fallen drastically.  From 1994 until 1997, identified cases in the U.S. were fewer than two per year.” Lisa Degnan,  Reye’s Syndrome: A Rare But Serious Pediatric Condition, U.S. Pharmacist.

To be sure, there are a number of factors that one could argue make these examples aberrational:  they involve matters of life and death; they generally involve young children or other vulnerable populations; and with the food allergen legislation and the Reye’s syndrome warning, the risks were conveyed not just by warnings, but by broader publicity and public education.  And the industry has become more sensitive to these risks.  For instance, most children’s pain relievers no longer contain aspirin (although some do), and some manufacturers have reformulated their products to reduce the use of food dyes, nuts, and other known allergens.   All fair points.  But the publicity surrounding Reye’s syndrome has disappeared over the past thirty years, as has the buzz surrounding children’s allergies.  Yet Reye’s syndrome has been virtually eliminated, and the risk of allergic reactions triggered by food allergens has been driven down.

Tune in tomorrow for Part B.

Listed below are links to weblogs that reference Ben-Shahar & Schneider Symposium Part XI A: David Vladeck, Living in a Post-Disclosure World, Part A: