Did Leonard Offer Too Much Money to Pepsi for the Harrier? 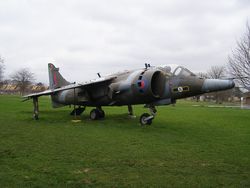 Readers of this blog should already be familiar with the famous Harrier jet case in which plaintiff John Leonard attempted to treat a Pepsi commercial as an offer for the sale of a Harrier jet in exchange for 7 million Pepsi points or the equivalent in cash, which came to about $700,000.  In Leonard v. Pepsico. (edited version available here), Judge Kimba Wood ruled in Pepsico's favor, finding that the commercial that Leonard mistook for an offer was actually a joke.

We have learned via the Contracts Prof listserv that a Harrier Jet was recently sold at auction for  £ 105,800 -- that is under $200,000.  In this case, the auctioneer specified that the jet was being sold "for display purposes only and is not currently airworthy."  It doesn't even come with any weapons systems.  Bummer.  Still, although the Pepsi commercial suggests an operational Harrier (there is no indication of weapons capabilities), Leonard's offer of $700,000 actually turns out to be way too high for a non-functional jet.  So, if instead of showing a kid landing a jet outside of his school, the commercial had shown the same kid impressing his friends with the grounded jet in his backyard, Judge Wood would have had a harder time construing the ad as a joke.

Since the notice of the jet for auction claims that this is the first time a Harrier has been sold at auction, Pepsico would  have had a hard time getting its hands on a jet.  Tthat would not have bothered Mr. Leonard, who more likely was interested in the difference in value between a functioning Harrier and the $700,000 he offered.  However, if the court were able to discover the actual value of a non-operational jet, it would have awarded Mr. Leonard no damages for the breach.

Listed below are links to weblogs that reference Did Leonard Offer Too Much Money to Pepsi for the Harrier?: