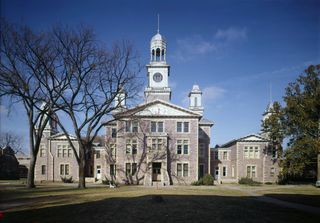 Christopher Keating was a tenure-track professor of physics at the University of South Dakota.  He did not get along with the only other full-time physics professor at the university.  Keating filed a grievance against her with their department head.  She responded with an accusation of sexual harrassment against Keating.  After two heated exchanges with Keating, the department head rejected Keating's claims.   Some time later, having been reprimanded for not seeking approval from either his colleague or the department chair for something that required such approval, Keating explained in an e-mail that he would not seek approval from his colleague because "she is a lieing [sic], back-stabbing sneak."

After that academic year ended, Keating was informed that his employment contract would not be renewed, because his e-mail violated Appendix G to the university's employment policy, which reads:

Faculty members are responsible for discharging their instructional, scholarly and service duties civilly, constructively and in an informed manner. They must treat their colleagues, staff, students and visitors with respect, and they must comport themselves at all times, even when expressing disagreement or when engaging in pedagogical exercises, in ways that will preserve and strengthen the willingness to cooperate and to give or to accept instruction, guidance or assistance.

Keating challenged his termination, alleging that the "civility clause" was unconstitutionally vague in violation of the U.S. Constitution's Due Process Clause.  The District Court granted Keating the declaratory relief he sought.  In Keating v. University of South Dakota, the Eighth Circuit reversed.

In the public employment context, the Eighth Circuit noted, the standard for vagueness is not as stringent as in the criminal context.  "Standards are not void for vagueness as long as ordinary persons using ordinary common sense would be notified that certain conduct will put them at risk of discharge.”   The Eighth Circuit found that the civility clause was neither facially void for vagueness nor impermissibly vague as applied to Keating.  The Court read the offending e-mail in the broader context of Keating's refusal to work with his colleagues or to even communicate with his immediate superiors.  So seen, the Court had little difficulty finding that Keating had failed to comport himself in ways that "preserve and strengthen willingness to cooperate."

Professor Arthur Leonard, of New York Law School (pictured),  posted a link to this case and queried whether the civility clause could pass contractual (as opposed to constitutional) tests for vagueness.   One wonders what sort of evidence either party would have to put forward to persuade the court as to the meaning of "civil" in this context.  Those of us in the academy can likely come up with plenty of examples of interactions with colleagues in which one or more university employees can be said to have acted in ways that were not civil.  Still, it is rare to see someone put in writing his principled opposition to cooperation and communication with his one disciplinary colleague and his department chair.  Could Keating show contractual vagueness by pointing to rampant and unpunished incivility on the part of other university employees, or does the university have discretion to terminate any given professor who, in its determination, crossed the line of incivility?

In short, if universities are free to point to a civility clause whenever they want to terminate a professor, tenure means nothing.  Keating was not yet tenured, but as to the constitutional and contractual issues, I don't think tenure would change the outcome of the case.  On the other hand, a civility clause might be a useful tool that university administrators can use in extreme cases when a faculty member -- even a tenured faculty member -- is so unprofessional as to degrade the working environment for his or her colleagues.  In this case, the fact that Keating called his colleague a lying, back-stabbing sneak" may be less significant than his statement that he would not trust his department chair or communicate with the university's only other full-time physics professor.

Listed below are links to weblogs that reference Eighth Circuit Upholds Constitutionality of Civility Clause in Termination of Professor: