For those who don't want to click on the links, here is our earlier summary of the facts of the case:

Plaintiff, Rabbi, S. Binyomin Ginsberg had been a member of Northwest's frequent flyer program, WorldPerks, since 1999.  By 2005, he was such a macher, Northwest granted him Platinum Elite Status (oy, what nachas!).  In 2008, Northwest revoked his membership. Ginsberg claims that Northwest took this action because he was a kvetch. . . .

The official reason provided for the termination was that Northwest had discretion "in its sole judgment," to cancel a member's account due to abuse of the program. Apparently, such judgment includes the ability terminate a membership if complaints persist after the "Enough with the complaining already!" warning.   Ginsberg sued, asserting four causes of action, but Northwest moved for dismissal, arguing that the Airline Deregulation Act (ADA) preempted all of Ginsberg's claims. 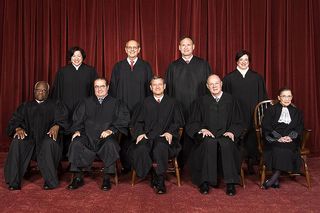 According to the The New York Times' synopsis of oral argument, Justices Ginsburg and Sotomayor expressed concern that the airline's frequent flyer program was either an illusory contract or subject to the airline's "whim and caprice."  Justice Breyer, however, seemed inclined to think that claims sounding in breach of contract are preempted by the federal Airline Deregulation Act of 1978, which was supposed to allow airlines to compete based on, among other things, price.  Since frequent flyer programs are price discounts, Breyer suggested that such programs are governed by the Deregulation Act and cannot be subject to claims based on state laws aimed at regulating the airlines.  However, in 1995, the Court exempted contracts claims from federal preemption in American Airlines v. Wolens.

The distinction between regulating airlines through state law and regulating airlines through breach of contract claims is a subtle one.  It seems to turn on whether Rabbi Ginsberg's claim is construed as a breach of contract claim or a claim that the airline breached a duty of good faith and fair dealing.  Paul Clement, arguing for the airline (on page 13 of the transcript) claimed that to permit a claim based on the duty of good faith and fear dealing would "enlarge the bargain."  Since the contract gave the airline discretion to terminate Rabbi Ginsberg's membership, Clement argued, invoking the implied duty of good faith and fair dealing takes his claim outside of the contract.  The claim implicates state policies because in some states the implied duty is not merely a rule of construction but a means of imposing public policy standards of "fairness and decency" on private agreements.

The Solicitor General joined the case as amicus curiae on behalf of the airline and attempted to clarify the federal uniformity concerns implicated in the case.  Counsel for the Solicitor General contended that state contracts law is fine to help adjudicate the intent of the parties, but where states impose public policy concerns in areas such as implied covenants and the unconscionability defense, there preemption is necessary.

This is very strange territory, and it was clear that Justices and counsel alike struggled to work out how to put such fine distinctions into place.  It is odd for the Court to say in Wolens that contracts claims are not preempted by the Deregulation Act but for the Court to now say that certain types of contracts claims, like breach of the implied covenant of good faith and fair dealing or unconscionability defenses are still preempted.

The Times provides this link to the transcript of oral argument.