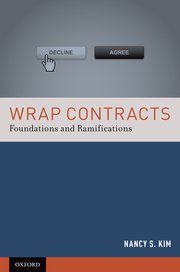 I’m thrilled to have the opportunity this week to engage with an outstanding line-up of scholars on the topic of wrap contracts.  In today’s post, I will respond to posts by Ryan Calo and Miriam Cherry.

Miriam Cherry observes that wrap contracts raise much of the same issues raised by contracts of adhesion and my book canvasses those similarities.  But they also raise different issues, primarily because their digital form makes it easier for companies to abuse and for consumers to ignore and also because courts don’t adequately recognize how form affects the behavior of both parties.  The difference in form leads to a difference of degree so that it’s virtually impossible (pun intended) to engage in any online activity without agreeing to the terms of an unreadable wrap contract.  My proposals aim to respond to the ways in which form affects perception to get us closer to the underlying objective of contract law – to fulfill the reasonable expectations of the parties.  The form of wrap contracts raises issues that are unique to them and consequently, call for different solutions - solutions that respond to the problem of form.

Ryan Calo focuses on the role of technological design in contract formation and enforcement which is not surprising given his extensive expertise and research in this area regarding effective notice.  The way that technological design of contracts affects parties’ behavior is underappreciated in the literature on contracts of adhesion.  Calo observes that the potential for mischief through the use of standard terms is even worse than the examples I give in my book  (this is a great relief since I am often accused of exaggerating the dangers of wrap contracts).  As Calo notes here and elsewhere,  the digital contracting environment has made it easier for companies to understand the consumer and so manipulate the consumer’s perceptions and behavior.  I agree and would like to respond to his wish that I had addressed the argument made by Scott Peppet and others (who I’ll call “digital solutionists”) who claim that this very environment might aid the consumer and that increased digitalization could ameliorate the limits of freedom of contract.  I agree with the first part, but disagree with the second.  Greater access to information and the digital landscape may, in many cases, aid consumers who can research products, announce their “likes” and dislikes, and tweet their dissatisfaction to attract the customer service departments of large companies.  This shouldn’t, however, influence the discussion regarding freedom of contract.  There is a distinction to be made between the product or service that is the subject of the contract and the terms of the contract itself.  The former is salient to consumers and they will often research that information before they act.  For a variety of reasons, including cognitive biases but also tricky design employed by companies, the latter is not.  Anyway, comparing terms does no good if the terms are all the same – it’s the old fiction about “shopping for terms” reincarnated in digital form.

Even assuming that the current state of affairs changes and there is awareness and competition for contract terms, the consumer is already inundated with too much information online.  Are we really going to impose a requirement or an expectation that they read through online reviews or download an app simply in order to understand the contract terms?  Even if the reviews exist (which they may not for some products or companies) and even if they are accurate (which they may not be), they add a layer of complexity to consumer transactions which may hamper effective decision-making and aggravate cognitive biases.   How much research is a consumer expected to do simply to be able to buy a product, bank or communicate online?  And is that something we want as a society – wouldn’t this negatively impact productivity, increase transaction costs for the consumer, and muck up the wheels of commerce (and isn’t this why we tolerate standard form contracts in the first place, to improve productivity, reduce transaction costs and grease the wheels of commerce)?

Drafting companies have all the power in the digital contracting environment – they have the bargaining power of old school drafters of adhesive contracts but they also have the power to present the terms in a multitude of ways.  They decide whether and how to attract user attention.  They determine whether to use clickwraps, browsewraps, multi-wraps, graphics or sounds.  They exercise that power in a way that meets very minimal legal requirements of notice.  The onus is on the consumer to ferret out terms, chase down hyperlinks, understand dense legalese and reconcile conflicting language.   Are we going to require even more of consumers, expecting them to “go beyond” the contract by reading online contract reviews and downloading the “compare contracts” app (assuming one exists)?  Maybe digitalization or augmented reality will make it easier for consumers to compare terms  --but it will likely make it more complicated especially when those terms are constantly changing thanks to modification at will provisions.   Doesn’t it make more sense to require the company to draft the terms so they are easy to find and understand?  There’s more to say about the digital solutionist view but I will leave that for another forum.  For now, my response is that the digital solutionist view is actually part of the problem, rather than the solution because it, like wrap contract doctrine, demands nothing from drafting companies and creates more work for consumers, exacerbating the lopsided balance of burdens that currently exists.

Listed below are links to weblogs that reference Wrap Contract Symposium: Response to Calo and Cherry: