In 1963 Stewart Macaulay asked:  what good is contract law?  His interviews with business(men) in a range of companies—including giants like General Electric, S.C. Johnson and Harley-Davidson—suggested the answer was “not much.”  He was repeatedly told that in practice, formal contracts were rarely drawn up for transactions (and that the boilerplate purchase orders and acknowledgements that might be exchanged weren’t really even seen as “contracts”.)  Any formal contracts that did come into existence were largely ignored, almost never pulled out of the drawer to help resolve transactional problems that might occur along the way.  And the idea of litigating, or even threatening to litigate, to resolve a dispute was dismissed almost entirely.

A dramatic set of findings.  They earned Stewart (pictured), in Grant Gilmore’s famous formulation, the title of “Lord High Executioner” of contract law, sounding the death knell of lawyers’ taken-for-granted assumption that they were essential to doing business.  Economists—introduced to the article fifteen years after it was published in two of the seminal papers in transaction cost economics, Klein, Crawford and Alchian (1978) and Williamson (1979)—were energized.  A great flood of work, much of it game-theoretic, soon followed to explain the puzzle of how business deals were held together without law.  Soon we had a standard distinction in the economics literature:  between formal—court-enforceable—contracts and informal ones—those enforced only by threats of the loss of a valuable long-term relationship or reputational standing.

Given how important Macaulay’s work has been to economists, my co-author Iva Bozovic and I were surprised to find out that almost no-one has attempted to replicate Stewart’s self-styled “preliminary study.”  So we decided to try.  So much had changed in industry since the early 1960s when Stewart did his research (Mad Men anyone?) we wondered whether contract law still was as irrelevant to contracting as it seemed to be back then.  We were particularly interested in the impact of a much more innovation-oriented economy on contracting.  And it was hard to predict how Macaulay’s findings might carry over.  On the one hand, in relationships that are focused on innovation—think collaboration between Facebook and Skype to integrate video chat and social networking, for example—so much is changing so rapidly that often the parties don’t have much of a clue how their relationship is going to develop.  That implies it’s really hard to write complete contracts that can be easily enforced in court.  On the other hand, there is so much novelty that there is almost no time for industry standards to stabilize giving parties guidance about how gaps in contracts are to be filled in.  This is a part of Macaulay’s findings often overlooked among economists (although it is dear to the heart of law and society folks):  in Macaulay’s study, the parties didn’t need well-drafted contracts because they had well-established industry norms to look to for guidance on how problems should be dealt with.  Breach of those norms was bad for business in a stable environment with lots of alternative contracting partners.

So if parties to high-velocity innovative business relationships don’t have established industry norms to look to and it’s so hard to write relatively complete court-enforceable contracts, what do they do? 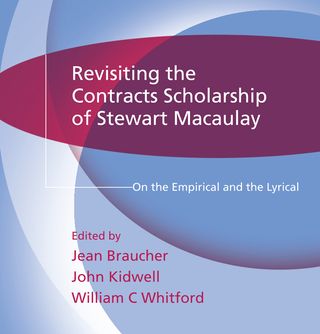 Our sample, like Macaulay’s “preliminary study,” is small.  It’s not necessarily representative.  But, like Macaulay, we have unearthed a fascinating puzzle:  why draft and consult formal contracts if you have no expectation of ever enforcing contracts in court?  According to the relational contracting literature that economists produced in response to Macaulay’s puzzle (if not contract, then what?), the only reason to write a formal contract is to get the benefit of formal court enforcement.

Our answer, drawing on work I’ve done with Barry Weingast (see here and here) about the function of law, is that formal contracting serves to coordinate beliefs about what constitutes a breach of a highly ambiguous set of obligations.  This makes relational enforcement mechanisms—loss of a valuable relationship, bad reputation—more effective than they would have been in the absence of a shared template for interpreting events.  We call this scaffolding:  formal contract law and reasoning—implemented by lawyers who share similar interpretation methods and materials that are common knowledge among them—helps to span the (large) gaps in relational mechanisms that arise when ambiguity is high.  It’s not that formal legal reasoning from a formal contract to decide whether a contracting partner is in “breach” is open-and-shut in these settings—there’s still lots of ambiguity to go around.  But our point is that the extent of ambiguity when the parties have at least designated a common methodology for classifying conduct as breach or not is much less than it would be otherwise.  We think the reason law gets singled out to play this role is because it is, as my work with Weingast emphasizes, expressly designed to perform this kind of an ambiguity-reducing and coordinating role—with its emphasis on comprehensive coverage, clarity and the presence of an authoritative steward (eg. courts) that is recognized as the final word on interpretation.

Our paper (which we wanted to work on more after the conference so it does not appear in the book whose publication this Symposium celebrates) provides lots of quotes from the businesspeople with whom we talked to support our analysis.  It’s hardly the last word on the subject—there’s that “preliminary” again—but it moves our understanding of the role of contract law a little further down the field on which Stewart first called the game—what good is contract law?  Our answer: quite a bit actually, even if almost nobody plans on going to court.

Listed below are links to weblogs that reference Revisiting the Contracts Scholarship of Stewart Macaulay, Post V: Gillian Hadfield: