This symposium marks the publication of Revisiting the Contracts Scholarship of Stewart Macaulay: On the Empirical and the Lyrical (Hart Publishing 2013), a volume edited by Jean Braucher, John Kidwell, and William C. Whitford.  Starting next week and continuing for several weeks, this blog will publish entries both by contributors to the book and by others who have engaged with Macaulay’s work in the field of contracts.

Fifty years ago, the American Sociological Review published Macaulay’s Non-Contractual  Relations in Business—A Preliminary Study, an empirical examination of the use and, more strikingly, the non-use of contracts in business.  One of the 20 most cited articles in the history of ASR, its influence has grown with each passing decade.  Macaulay (pictured) has produced an impressive number of other significant articles in contract law, as well as influential work in law and social science, and is the lead author of the casebook, Contracts: Law in Action, Vol. I and II (LexisNexis 3rd Ed. 2010/2011), co-authored by Braucher, Kidwell, and Whitford (introduction  available here).

“Bill Whitford, the late John Kidwell, and I wanted to celebrate Macaulay’s contributions to contracts scholarship, particularly his use of law in action and relational perspectives,” explains Jean Braucher, Roger C. Henderson Professor of Law at the University of Arizona.  “We were extremely pleased that leading and rising scholars contributed 15 original chapters to the book, everything from theoretical essays to new empirical work to relational critiques of legal doctrine.”  Braucher adds that Kidwell, who died in 2012, participated fully in the development of the book and edited several of the chapters. 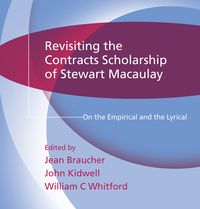 Kidwell, Whitford, and Macaulay all served for many years on the faculty at the Wisconsin Law School, where the law in action approach is a tradition.  Whitford and Macaulay are both emeritus professors there. Macaulay, who joined the Wisconsin law faculty in 1957, has held two named professorships there, serving as the Malcolm Pitman Sharp Professor and Theodore W. Brazeau Professor of Law.

Listed below are links to weblogs that reference Introducing our Virtual Symposium: Revisiting the Contracts Scholarship of Stewart Macaulay: