This is the second part of the ninth in a series of posts reviewing Margaret Jane Radin's Boilerplate: The Fine Print, Vanishing Rights and the Rule of Law.

Kimberly D. Krawiec is the Kathrine Robinson Everett Professor of Law at the Duke University School of Law.


As I stated in my last post, I want to use the example of the travel company liability waiver at left to illustrate the boilerplate phenomenon.  And here is where my analysis would differ from Peggy’s, perhaps in important ways.  She argues, for example, that many consumers cannot understand the complicated legalese in boilerplate.  That may be true with some boilerplate, but these terms are quite simple.  Plus, in my experience, the consumers of this kind of adventure travel tend to be fairly sophisticated in terms of their ability to read and understand the kind of document I’ve posted above. Certainly many if not all of these purchasers can understand that the tour company is saying that it is not responsible even if you die through the negligence of its employees.

Peggy also argues that many consumers do not bother to read the boilerplate. That is often true, but my experience suggests that it is not accurate with respect to my fellow adventure travelers.  The liability waiver, which the company hounds you to sign prior to departure, is a regular lamentation/good laugh over the group dinners.  Finally, Peggy argues that consumers miscalculate the cost of such waivers because we are bad at assessing risk, which she appears to equate with underestimating risk.  Again, this is sometimes true, but people are prone to risk overestimation, as well as underestimation, depending on the circumstances.  Finally, and this is the lesson from the disclosure literature, famously advanced by Alan Schwartz in the boilerplate context, not everyone needs to read, understand, and act on her preferences in order to effect a change in boilerplate terms. By voting with their feet, consumers (like investors) can, at least in theory, force down the price of products and services accompanied by onerous boilerplate, thus opening up an opportunity for boilerplate entrepreneurs to intervene with terms more palatable to consumers.  Yet that has not happened in the adventure travel context.  Why not? 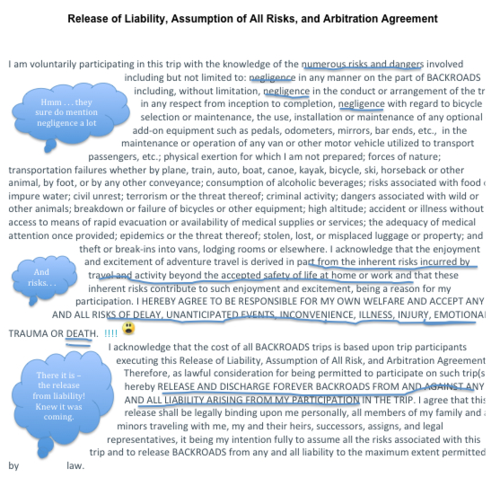 Let me offer a few possibilities.  One possibility, of course, is that consumers are not actually willing to pay for the ability to hold tour companies liable – they prefer lower prices instead.  I’ll return to that possibility in a moment.  However, it is also possible that consumers have not fully impounded the information regarding liability waiver into product price.  This is not because such consumers are unsophisticated, or don’t read, or are helpless against big bad travel companies, but because the purchase of an adventure travel package is a complex decision, requiring the trade-off of numerous factors affecting the quality and price of the product/service + boilerplate package.  And most of us just aren’t very good at that.  Consumers are not just weighing the costs and benefits of various liability waivers against price, but a multitude of factors, including the reputation of the company for both fun and safety, the type of travel and activities offered, and even other elements of the contract, such as the cancellation policy and the availability of travel insurance to cover the type of travel and activities in question.

This analysis, if true, is both good and bad for Peggy’s purposes. On the plus side, it supports her fears of market failure, even when consumers are relatively sophisticated and informed.  But at the same time, it cautions against the possible efficacy or easy application of her solution.  If calculating the optimal trade-offs among price and the numerous other elements of the product/service + boilerplate adventure tour package is decisionally complex for experienced consumers of travel services, then it is difficult for courts and lawmakers as well.  Perhaps the legislature was right in crafting a default rule placing liability for negligence on the tour operator, in the hopes of creating incentives for such tour operators to exercise care before putting their clients at risk.  And perhaps consumers are mistaken in signing away those rights, thus “deleting” rights thoughtfully granted by the legislature.  Peggy places a high value on democratically-generated rules such as these, and demonstrates more faith in such democratic processes than in market ones.

Perhaps she is right.  But, perhaps, the legislature simply got this one wrong. Perhaps consumers believe that there are cheaper and more effective mechanisms for differentiating trustworthy and careful adventure tour operators from untrustworthy and negligent ones.  Perhaps consumers have quite rationally concluded that firm reputation; their own repeated positive experiences with a particular operator; the prior impressions of friends, neighbors, and other experienced travelers; and third parties, such as travel insurance companies, all have helped them to choose a tour operator whose risk of negligent operation is – if not fully controllable – at least tolerable, given the price paid.

With Boilerplate, Peggy Radin has hit another home run.  As with her work on contested commodities, she has forced me to reconsider my priors, and has poked some holes in my assumptions.  But in both cases a basic ideological difference -- the extent to which we trust private ordering as compared to public -- prevents a full meeting of the minds.

Listed below are links to weblogs that reference Boilerplate Symposium IX B: Kim Krawiec on Contracts as Disclosure, Part II: