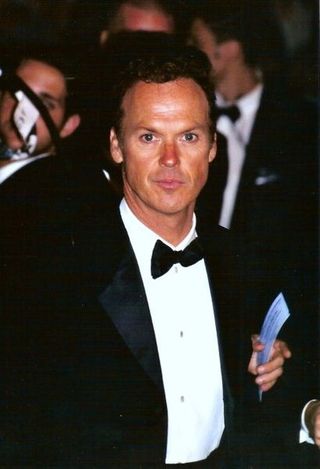 We are grateful to the website Lexology.com and to Ellen D. Marcus of Zuckerman Spaeder LLP for this informative and interesting post about this complaint filed in the Northern District of Illinois by Merry Gentlemen, LLC against actor and director, Michael Keaton.  According to the complaint, Keaton breached his contract to act in and direct a film called Merry Gentlemen by failing to deliver it on time and by marketing his own version of the film to the Sundance Film Festival.  The film cratered, grossing only $350,000 at the box office.  Moreover, the producers allege that Keaton's various breaches caused "substantial delays and increased expenses in the completion and release of the movie," thus causing the producers to suffer "substantial financial loss."

Ms. Marcus's post picks it up there, citing Restatement 2d's Section 347 on the elements of expectation damages and illustrating what sort of sums the producers might be looking to recover.  Ms. Marcus has to speculate, as the producers cite no figures beyond those required to meet the amount-in-controversy requirement to get their diversity claim into a federal court.

Whether or not the allegations of the complaint are true, they paint a nice picture of the behind-the-scenes machinanations invovled in getting a film out to the viewing public.  According to the complaint, Keaton produced a "first cut" that all agreed was unsatisfactory.  There then followed both a "Chicago cut," edited by the producers and by Ron Lazzeretti, the screenwriter and the producers' original choice for director, as well as Keaton's second director's cut.

The producers then shopped the Chicago cut to the Sundance Film Festival, where they were awarded a prime venue.  Keaton then allegedly threatened not to appear at Sundance unless his cut was screened.  That was a dealbreaker for Sundance, so despite already having sunk $4 million in to the film, the producers claim they had no choice but to agree to screen Keaton's second cut at the festival.   They did so through a Settlement and Release (attached to the complaint, but not to the online version) entered into with Keaton, which they now claim was without consideration, despite the recital of consideration in the agreement, and entered into under duress.

Despite all of this, the complaint alleges that the Sundance screening was a success, since the USA Today identified "Merry Gentlemen" as one of ten stand-out films screened that year.  But the producers were unable to capitalize on this success, since Keaton's alleged continuing dereliction of his directorial duties resulted in dealys of the release of the film from October of November 2008 to May 2009.  The producers allege that the film was a Christmas movie (or at least was set around Christmas time), so Keaton's delays caused the movie to premiere during the wrong season.

The producers allege that Keaton continued to refuse to cooperate with them after Sundance.  Somehow, the movie nonetheless was released to some positive reviews:

The movie, as released (based upon Keaton’s second cut and numerous changes made by plaintiff), received substantial critical praise. Roger Ebert called the film “original, absorbing and curiously moving in ways that are far from expected.” The New York Times’ Manohla Dargis called it “[a]n austere, nearly perfect character study of two mismatched yet ideally matched souls.” David Letterman said on his Late Night  talk show, “What a tremendous film . . . . I loved it.”

Note to the producers' attorneys: if you've got Roger Ebert and Manohla Dargis in your corner, you don't need Letterman (or The USA Today for that matter).

Nonetheless, the film did not succeed, grossing only $350,000, allegedly because of Keaton's failure to promote it.  Indeed, some of the complaints allegations relating to Keaton's promotion efforts suggest some real issues.  Upon being asked by an interviewer if she had accurately summarized the film's plot, Keaton allegedly responded that he had not seen it for a while.

We note also that Ms. Marcus's post is cross-posted on Suits by Suits, a legal blog about disputes between companies and their executives, a site to which we may occasionally return for more blog fodder.

Listed below are links to weblogs that reference Movie Producers Sue Michael Keaton for Breach of Contract: