This is the eighth and final post in a series of posts on Oren Bar-Gill's recent book, Seduction by Contract: Law Economics, and Psychology in Consumer Markets.  The contributions on the blog are written versions of presentations that were given last month at the Eighth International Conference on Contracts held in Fort Worth, Texas.  Below, Professor Bar-Gill (pictued) responds to the comments provided by Angela Littwin, Alan White and Nancy Kim.

I wish to open these comments by thanking Jeremy for organizing a great panel and for following up with this on-line symposium. I also wish to thank Angela, Alan and Nancy for their thoughtful comments and suggestions. I cannot, in this space, respond to all the valuable ideas and critiques that these experts presented in their posts. Rather, I will touch upon three sets of issues that I consider especially important or provocative.

1. The Role of Competition

Competition is often considered to be a solution to market failure. “Seduction by Contract” argues that competition is not necessarily a solution to the behavioral market failure, which is the focus of the book. In essence, if imperfectly rational consumers generate biased demand, sellers in a competitive market must respond to this biased demand by designing products, contracts and prices that exploit the consumer bias. 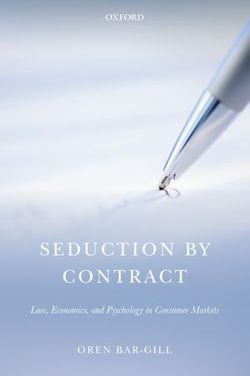 This does not mean, however, that competition cannot play a helpful role. It can, and it does. Consumer biases and misperceptions are dynamic and can be influenced by market forces. Specifically, sellers can educate or debias consumers through advertising. For example, until recently, imperfectly rational consumers paid little attention to late fees when shopping for a credit card. Now banks are competing over cardholders by advertising their late-fee policies. Another example, noted in Nancy’s post, concerns early termination fees (ETFs) in cellphone contracts. Until recently, ETFs were non-salient to consumers and a 2-year lock-in contract was the norm. Now many carriers are advertising No Contract options. Nancy argues that the rise of No Contract is an imperfect market solution, and I agree that it is imperfect. Nonetheless, it shows how markets can respond to changes in consumer perception (and misperception) and, in some cases, lead these changes.

Alan asks about the appropriate normative framework. As an economist, I am a welfarist. But I should emphasize that welfarism is very different from utilitarianism. The welfarist cares about distributional effects; the utilitarian does not.

Since I focus my policy analysis on disclosure (see below), Alan infers that I care primarily about autonomy. But, as explained above, my normative framework is welfarist. My preference for disclosure regulation rests on the argument that optimally designed disclosures can enhance social welfare, by helping to overcome (or bypass) consumer biases and misperceptions.

The policy analysis in “Seduction by Contract” focuses on disclosure regulation. This is not because disclosure always works and it is not because disclosure, when it works, perfectly cures the behavioral market failure. I focus on disclosure, because I think it can help, when optimally designed; because often it is the most (and sometime the only) politically feasible mode of regulation; and because it avoids certain costs associated with more paternalistic modes of regulation. To be clear, I do not argue that more paternalistic intervention is never warranted. And if I had the tenacity to write a longer book, I would definitely explore other regulatory approaches beyond disclosure. Angela and Alan are disappointed by my focus on disclosure. I hope this response provides some (limited) reassurance.

Listed below are links to weblogs that reference Online Symposium on Oren Bar-Gill's Seduction By Contract: Professor Bar-Gill Responds:

If you are wandering for the methods to get help in windows 10 so you need not to worry as here this portal will help you to get rid of all your hurdles as this platform includes all essential information by which your work will be all easier. Try out for once.