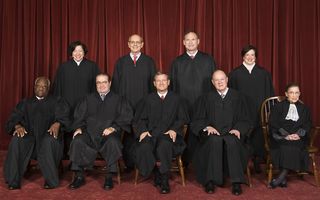 In Nitro-Lift Technologies L.L.C. v. Howard, the U.S. Supreme Court granted certiorari, vacated and remanded a case that came to it from the Oklahoma Supreme Court.  The first sentence of the Supreme Court's per curiam decision says it all:

State courts rather than federal courts are most frequently called upon to apply the Federal Arbitration Act(FAA), 9 U. S. C. §1 et seq., including the Act’s nationalpolicy favoring arbitration. It is a matter of great importance, therefore, that state supreme courts adhere to a correct interpretation of the legislation. Here, the Oklahoma Supreme Court failed to do so. By declaring the noncompetition agreements in two employment contractsnull and void, rather than leaving that determination tothe arbitrator in the first instance, the state court ignored a basic tenet of the Act’s substantive arbitration law. The decision must be vacated.

Although the trial court had dismissed Respondents' challenges to the enforceability of their non-competition clauses and would have allowed the arbitrator to decide the merits, the Oklahoma Supreme Court struck the non-competition clauses as violative of public policy.  In so doing, SCOTUS point out, the Oklahoma Supremes ignored clear case law providing that "attacks on the validity of the contract, as distinct from attacks on the validity of the arbitration clause itself, are to be resolved 'by the arbitrator in the first instance, not by a federal or state court.'" [citations omitted]

Listed below are links to weblogs that reference SCOTUS Smacks Down Oklahoma Supreme on Arbitration Law: