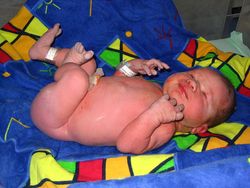 The Kunz and Chomsky caebook features two cases that highlight the potential for harsh results arising from a mechanical application of the infancy doctrine.  The first such case is the subject of this week's Limerick.  The second, well, you'll have to wait and see.

In Webster Street Partnership, Ltd. v. Sheridan, the partnership rented an apartment to two infants and expected them to pay $250/month rent, plus some additional incidental costs and a $150 security deposit..  That's right, infants!  The nerve!  How are two little babies supposed to pay the rent?  Sell their diapers for fertilizer?  Pose for cute baby pictures?  Awww, that is a cute baby!

Well, actually, contracts law considers you an infant if you are under 18.  At common law, contracts with infants for non-necessaries are voidable at the election of the infant, and these two boys were under 18 at the time the contract was formed.  The boys did not pay their rent, and the partnership sought to collect.

The first issue was whether an apartment is a necessary.  Seems like it ought to be, but . . . nope.  Second issue was whether the fact that the boys actually had use and enjoyment of the apartment should count for something.  Nope.   Finally, one of them turned 18 seven days before vacating the apartment, but the court found preposterous the notion that a mere seven days could be a sufficiently lengthy time to permit ratification of the earlier, voidable agreement.  The partnership also had to return the deposit.  Ugh.

A number of jurisdictions have introduced equitable limitations on the doctrine, and that just seems right.  The concept of "necessary" is so elastic as to provide no notice or warning of the possibility of avoidance to parties that might have entered nto contracts with infants in good faith.  The result in this case strikes me as highly unfair to the landlords and permits the two young rapscalions escape the consequences of their delinquencies.

For indulging the two boys’ audacity
In contracting without capacity,
The landlord must tender,
And the court gets to render
A paean to doctrine’s opacity.

Listed below are links to weblogs that reference Contracts Limerick of the Week: Webster Street Partnership, Ltd. v. Sheridan:

Nice one! And kudos/props also for using the underappreciated but delightful word "rapscallions" in the text accompanying the limerick!